This is the pulse.

As a lifelong moviegoer, I've probably seen a thousand action movies. Schwarzenegger, Stallone and Willis were the icons of my day, with an appearance or two by the likes of Segal and Van Damme. As I got older and sought out less uber-mainstream guys, I discovered early stuff by Jackie Chan, Jet Li and Sammo Hung. These guys weren't as charismatic as my guys (dubbed dialogue being their undoing), but they seemed to both actually kick ass and legitimately take a beating. It was a revelation to my younger self.

As these guys all got older, it seemed that very few others were willing to step up and carry the torch. The Rock seemed to be the one, but he decided to make 4,000 family flicks. Jason Statham churns 'em out, but none of his flicks really stand out. He doesn't have an iconic role - they all seem to bleed together. Tony Jaa came along, and literally knocked the shit out of the action genre, but he too faded into the weirdness of the Ong Bak sequels. Was I growing up, or was the action genre growing stale? 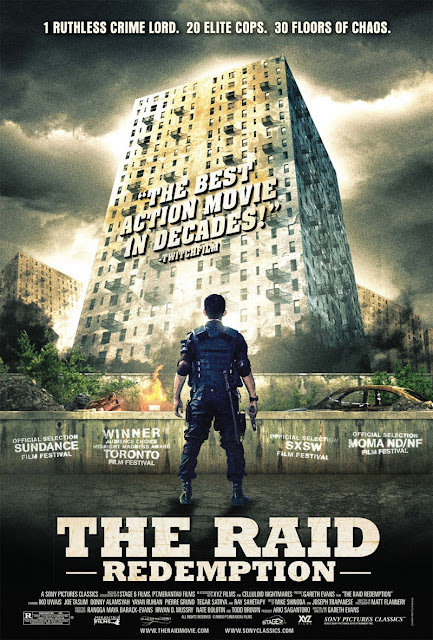 Today though, it happened. I saw an action movie that completely and utterly renewed my faith in the genre. It was fast-paced and bloody as f--k. It didn't have a bullshit love story for the ladies, and it didn't have some asshole walking toward the camera while something exploded behind him. Shit, it didn't even have any one-liners. What it did have was some of the most insane stunts and camerawork I have ever seen in a movie, period. Ladies and gents, I give you The Raid: Redemption.

The plot is simple. A SWAT style group of cops have been selected to infiltrate an apartment complex that's home to a crime boss. This guy has been undisturbed by the police for a decade. Rival gangs have tried, but nothing can penetrate his fortress. This building is home to some crazy-ass shit, to say the least. We get all this information on the way to it, and from there? Oh, it's f--king on.

Hype is usually the number one reason that I will ever genuinely hate a movie, and I had really psyched myself up for this one. I hadn't heard anything about it recently, but months ago I saw a redband trailer on JoBlo. I instantly forwarded it to a friend and labeled the link simply: boner-inducing violence. All that anticipation, and I still loved pretty much every minute of it. 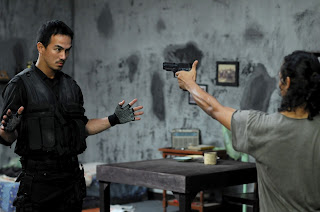 Last night, I saw a commercial for it and (shhh, don't tell my wife), we got out of school early today [parent conferences]. I hit up a 12:30 showing, grabbed some nachos, and me and the other two solo guys in the theater sat down and got our asses handed to us. The old guy in front of me loved it, and told me on the way out, Did you know it was subtitled? I guess I got in my readin' for the day.  How this guy found his way into the theater is beyond me, but that exchange might have made The Raid even better.

Surprise! I'm rambling. I was so awed by this one, I'd actually consider seeing this again theatrically. It was so f--king loud and intense, I don't think my setup could do it justice. If you have a chance, go. Trust me. If you have a d--k and don't like this movie, I owe you an apology. I'm not sorry for steering you in the wrong direction, no. I'm just sorry you're such a pussy.

Okay, I don't want to spoil anything, but I want to list (in vague detail) my 10 favorite things in this one: 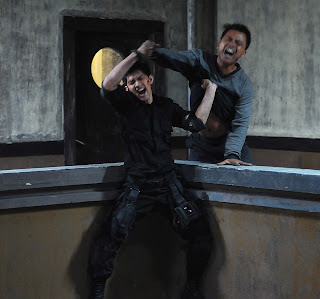 UPDATE:  4/23/12. My main man H. Dunphy caught this one on my recommendation. His text to me afterward?  If u had an ass in that movie, it got kicked. Brilliant.

Email ThisBlogThis!Share to TwitterShare to FacebookShare to Pinterest
File this under All That I Ever Wanted