We are morally indefensible, absolutely necessary.

Ah, the movie virus. Generally, it's a terrible thing - they either wipe out the planet completely, or turn its inhabitants into blood-thirsty rage monsters. Occasionally though, the movie virus can be a good thing. It can make you stronger, smarter, Hell, better. But there's a catch. There's always a catch. You're probably going to need more of it at some point, and guess what? Getting more, well, that's not going to be easy. 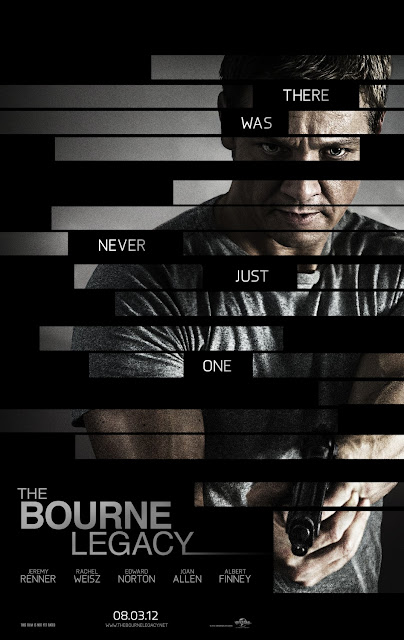 It's been a week since I've seen The Bourne Legacy. And while I wish the excuse for this late review was only related to going back to school/work, I've also, oddly enough, acquired some sort of mysterious virus of my own. Chills, muscle pain, full-body rash, and my favorite part of all, it hurt to look sideways, have been some of the telling signs. So, if this review is for largely worse (or, better) than the norm, well, let's go ahead and blame wavering health.

Last Sunday, I wasn't terribly excited to see this flick. I had already decided I hated it due to over-exposure to the trailer (which was seemingly placed in front of every movie I had seen this summer). Additionally, I had stayed up late on Saturday and watched Ultimatum and was owned by its relative greatness. It seemed like a perfect place to end the franchise.

But, as is the trend, Hollywood couldn't leave well enough alone. And while Legacy doesn't do anything particularly wrong, it's altogether forgettable, really. I'm a week out, and I quite honestly, can hardly remember anything that happened. Oh sure, maybe it has something to do with whatever is ravaging my immune system, but I'm leaning toward the microscopic need for even telling this sidestory as the main culprit.

I realize that the I haven't even mentioned the plot yet, and it's because I don't really have to. I know you've seen the preview by now, and if not, just look up there at the poster. Outside of adding a super-fine picture of Rachel Weisz, you've been given everything you need. Renner has a gun. And he does things with it. And yes, there never was just one.

In an effort to get some much-needed sleep, let's head right over to the willing participants in the program, the Yays and Boos, shall we?


Yaaaaaaay!
Booooooo!
Well, kids, I'm going to call it here. If it takes me a while to post again, it's only because school starts this Tuesday. That, or I've succumbed to my illness and am currently chewing on someone's face as you read this. Stay tuned.
Posted by m.brown at 10:57 PM

Email ThisBlogThis!Share to TwitterShare to FacebookShare to Pinterest
File this under It's Air Bourne