I was trying to be romantic.

Long before we were married, my wife was just another pretty girl that I obsessed over. I met her at a party for a mutual friend, and then began to strategize how I could see more of her. This gameplanning, had become a seemingly semi-annual tradition since high school, as I would systematically figure out how I could accidentally bump into her as frequently as possible. If you knew how much casual conversation I would go through for the one bit of pertinent information, you would probably think I was nuts. But, that's what love is, right? Batshit insanity, at least early on. I mean, what normal person would spend hours in a McDonald's parking lot (because that's where they got the best cell-phone reception) registering for classes for someone else, before registering for their own? I mean, not me of course, 'cause that shit's crazy.

Though, then I could know exactly what classes I needed to register for..[maniacal laugh]. 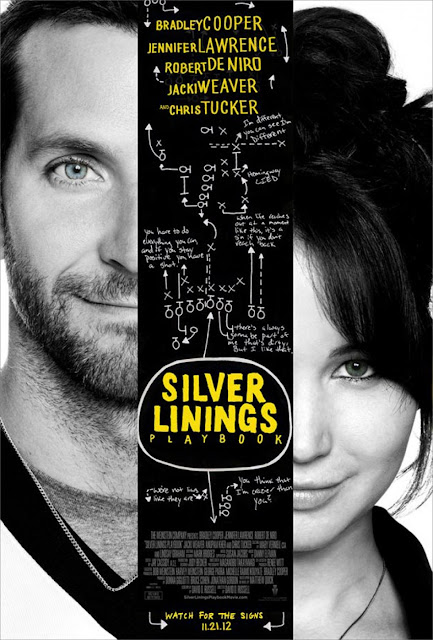 In my silly, um, fictional anecdote, everybody involved was rather normal and relatively sane. But in Silver Linings Playbook, that's not the case. David O. Russell's film tells the story of Pat, a fairly regular guy who has just been discharged from a mental health facility. See, Pat came home one day to find his wife in the shower with another man. Pat, probably a little unstable to begin with, lost his mind and beat the Hell out of this guy. Shockingly, his wife didn't approve of such a loving grand gesture, and she now has a restraining order against him. Pat has been away for eight months, and has likely spent every minute of that time, like a young blogger you might know, plotting how to get the girl (back, I suppose). In his head, it's going to work out just fine. He just needs to stay focused and positive.

Unfortunately, Pat's life is filled with distractions, a few of which could fall into the negative category. First up, is his family. His dad is an incredibly superstitious bastard, whose life revolves around the Philadelphia Eagles (poor bastard). Next up, is Tiffany. Tiffany is a recently widowed sister-of-a-friend, who eventually commits to helping Pat get his wife back. She's not completely selfless (or sane), as she insists that Pat help her enter a dance contest her late husband was supposed to be a part of. Seems fair enough. Well, last but not least, is Pat himself. Pat's completely selfish, obsessed with the inevitability of getting his wife back. He has no time for such things as grace and kindness, let alone common decency when he speaks. These things interfere with his plan. Pat is committed to one thing and one thing only: getting the girl.

It's actually a very simple story, it's just populated with complicated (read: f--ked) characters. As routinely frustrating as Pat's decisions and behavior can be, there's a refreshing amount of honesty to every move he makes. The rub however, is we know that no matter how hard he tries, his wife isn't coming back. And even if she would, it gets to a point where we don't want her to anyway. I mean, Pat's busting his ass to get his cheating wife back. First, he's an Eagles fan, and now this?

After crying themselves to sleep on Sunday after the Patriot's loss to the Ravens, the Yays and Boos have decided they won't watch ESPN for the next three weeks. I guess they found their silver lining, too. 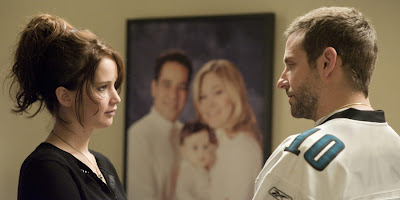 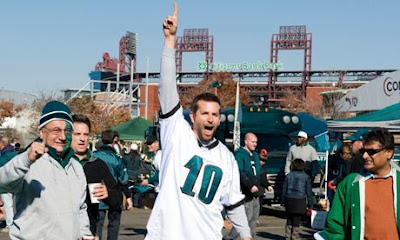 Boooooo!
I love the idea that there really is someone out there for everyone, even if you're a bit of a mess and a little unstable. Once, before we were dating, I actually, legitimately, happened to run into my future wife at the grocery store. As I hadn't planned this chance encounter, I was at a loss for what to say. She told me she was going to a costume party that night. She then said flippantly, you should come.

Less than an hour later I had put on a ripped shirt and denim shorts, painted my entire body green and dyed my hair. I was the (not so) Incredible Hulk.

Maybe she knew I was going to be there. Maybe she had done a little reconnaissance?
Nevermind. That's just crazy.
Posted by m.brown at 12:38 AM

Email ThisBlogThis!Share to TwitterShare to FacebookShare to Pinterest
File this under The Dark of the Matinee