Making bad decisions is nothing new to me.

Communication Arts. That's what the adults call the class I've spent my career teaching (I'm sure the kids have another way of putting it). For me, it's simply a class about words. Carefully chosen words, at that. And while it feels like I spend the majority of my time and effort on poorly chosen ones instead, there's a time of year where students genuinely make make me happy, no - ecstatic, halcyonic or perhaps even cock-a-hoop to be a teacher: The National Spelling Bee. While it doesn't hurt that the Bee is in the last two weeks of the school year (ah, the glory of late-May), what I really love is the fact that for a few days out of the year smart kids are celebrated.

I almost wish I could join in. 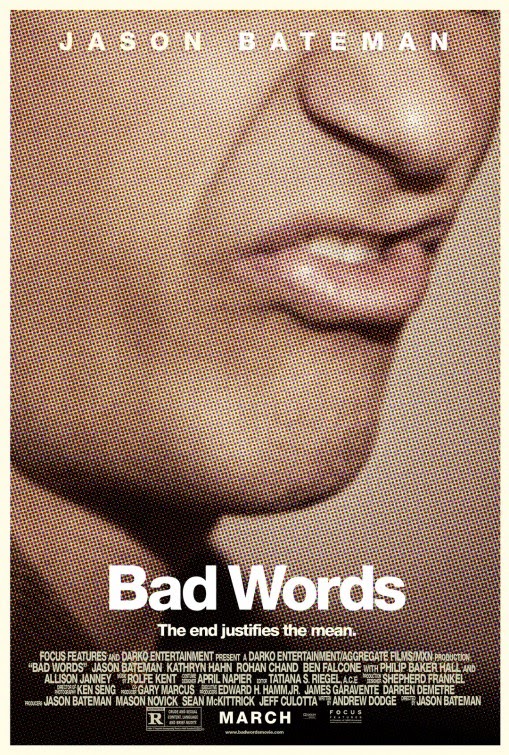 Bad Words, the directorial debut of Jason Bateman, tells the story of a 40 year-old man doing just that - competing in the National Spelling Bee. While my adoration of the Bee comes from smart kids doing smart things (the exception in these parts), Bateman's Guy Trilby is motivated by something far less noble. He wants to f--king win it. F--k kids. All of them.

While the blunt, obscenity-laden tirades provide much of the comedy early on, this aspect of the film seems a little derivative, honestly. It's not to say that it doesn't work (I might have shed a tear or two laughing), it just felt like Bateman was more often than not channeling his inner Melissa McCarthy (his co-star from the vastly inferior Identity Thief [review]).And judging by how her last film fared, mentioning her shtick may be quite the deal-breaker.

Fear not, as any missteps in the naughty bits are completely forgivable due to the relationship Guy develops with one his competitors, Bee-favorite Chaitanya Chopra (played by the adorably badass Rohan Chand). The chemistry between the free-wheeling a-hole Guy and the infinitely curious kid, was easily my favorite part of the film.Guy, by being the worst adult on the planet, ends up teaching the kid there's more to life than studying and doing what Dad says (part of this lesson involves a big-tittied hooker, naturally). And in return, Chaitanya shows Guy that being a rotten f--ker isn't his only option. Wait, what?

At 89 minutes, Bad Words is an easy recommendation. It's crass, overly-ridiculous, and somewhat oft-putting at times (Guy and Jenny's relationship is the worst), but like any R-rated comedy these days, it's got heart. Sure, setting a film at the National Spelling Bee probably only excites me and a handful of van-driving weirdos, but the absurd scenario is perfect for dark-comedy. The laughs are steady, the characters endearing and Bateman keeps the film moving on both sides of the camera.

One of the last vocabulary words I give my students is the noun floccinaucinihilipilification. I usually just give it for shock value, but they always get into learning how to spell it. Could I have the definition, please? The estimation of something as valueless. Could you use it in a sentence? The Yays and Boos, along with the entirety of Two Dollar Cinema is a clear example of...


Booooo!
You know, I actually had to give a Spelling Bee pre-test this past week and I have to say, two of the words completely baffled me. The first, not that it was hard to spell, was whiskery. Has anyone ever used this word before? Really? Whiskery!? The other one, the final word on the test, was panacea. I had never even heard of it, and was worried I couldn't even pronounce it correctly.

As I read them out loud, I heard one kid say, these words are stupid.

Email ThisBlogThis!Share to TwitterShare to FacebookShare to Pinterest
File this under Bad Words Good Times