As I write these words (well, wrote), I'm anxiously waiting aboard Flight 5065 (with non-stop service to Charlotte) for the flight attendant to shut the cabin doors so we can get the Hell outta this place.

Wait a second...ah, nevermind. For a minute there it looked like that beefy dude outside was going to leave my luggage just sitting there on the runway, but he finally tossed it on the conveyor thingy.

Anyway, on the way into the plane, I managed to catch a glimpse of the pilot. He looked like a competent enough guy, with a profile landing somewhere between Harold Ramis and Jim's Dad, Eugene Levy. And as I stared at him, I couldn't help but think, no matter how good he is at flying airplanes, it's highly unlikely he's the best.

How can I now sit aboard his plane and have the stones to say such a thing? Well, to be quite honest, I've already flown with the best pilot ever. And judging by the box office numbers...a lot of us have.

And that guy looks a lot like Tom Hanks. 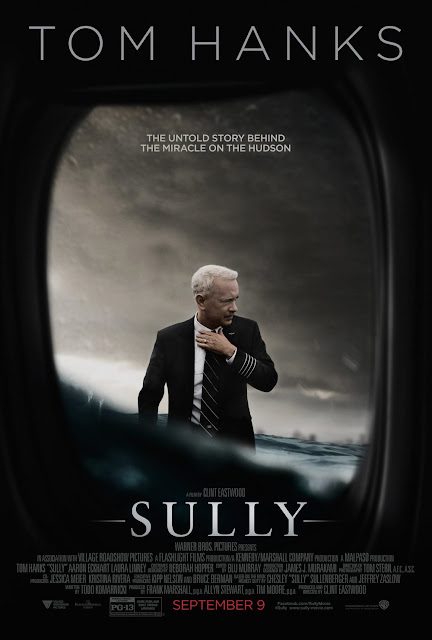 I don't know (or care to know, frankly) what liberties were taken in bringing Sully to the big screen, but whatever was added or omitted, the result is a fantastic (though thoroughly gut-wrenching) film. Under the direction of the legendary Clint Eastwood, something I never wanted to see in the first place became don't blink cinema. Happy endings aren't supposed to be this sad.

I'm sure you know the story, but if not, he's the short version. After a routine take off on a cold January morning in '09, Captain Chelsey Sullenberger's plane suffered total engine failure as a flock of Canadian geese flew into and disabled both main engines. With only moments to spare, Sully and his co-pilot decided to land the plane on (in?) the Hudson river, and unbelievably, everyone survived.

"And that's where the story ends. Sully was a hero for a couple of days, and everyone lived happily ever after. I guess. [flicks cigarette]. Are we done here?" -m.brown, the world's biggest a-hole,, had you asked him about the Miracle on the Hudson.

Okay, speaking of miracles, our flight attendant is super hot. She just literally handed me my nuts.

Uh, where were we? Oh, right. While many of us may have smiled at the good news coming out of NYC and moved on, Sully and First Officer Jeffrey Skiles we're on the defensive. America's heroes were quietly battling the NTSB in an effort to prove they did the right thing. Wait, what?

Yeah, it turns out, internally at least, Sully's reputation, livelihood and pension we're totally on the line. It seems a closer examination of the events had some authorities believing that Sully made a critical error in judgement, and the river landing was unnecessary and reckless. Good thing that not only can Sullenberger handle himself in the cockpit, but this man is also an ass-kicker in a courtroom, too. It's simply incredible.

Speaking of incredible, Tom Hanks, yet again, delivers one of my favorite performances...ever. Maybe it's the character, maybe it's just Hanks, but he perfectly captures the somewhat fragile stoicism of Captain Sullenberger that no other actor ever could. Like Hanks, we may not know a lot about Sully personally, but we uniformly love and accept him regardless. And also like Hanks, we trust him (and in Sully's case, with our lives [though honestly, I'd trust Hanks, too]. Even if things are bad, even if he's terrified (though he'll do his best to never let on), he's going to come through.

But best of all? We're going to be okay.

(oh, and if you could find someone more legitimately admirable? Well...I'd be shocked. And furious.)

Also full of surprises, are the Yays and Boos. We saw this one, alone, on my thirty-seventh birthday no less. But don't think that was the reason we were trying not to cry the entire time. Not even close.


I swear they said we were preparing to land twenty minutes ago, but I haven't even heard the wheels come out. Goodness. This flight, the first of two, has taken way too long. I mean, Sully landed his plane in less than three minutes. This dude's had us up in the sky forever. When it comes to landing a plane, what's so friggin' hard, you know?

Email ThisBlogThis!Share to TwitterShare to FacebookShare to Pinterest
File this under Berger and Flys