If you must blink, do it now.

I love a good story. Always have. But if there's one thing that I love more than a good story, it's a good storyteller. If only they weren't so elusive...

When I listen to my students tell stories (something certain kids love to do), they all too often inject their tale with lies and half-truths because they lack confidence and live in fear that their audience will turn against them. My son, who's seven, tends to lose track of where he's headed, and I generally (and impatiently) take over, leaving him to fill in the blanks. But my daughter? All three years of her? That little girl can spin the most elaborate tales I've ever heard.

Too bad they're all make believe. Like, over-the-top dogs broke into my room and bit all my dresses level of imagination. Hopefully, I'll still be alive...

...when she finally starts telling the truth. 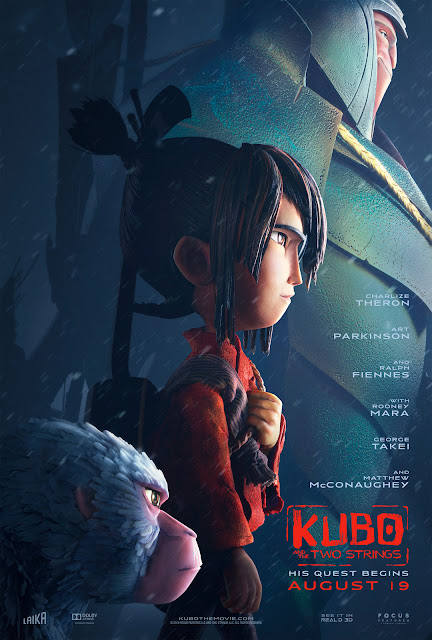 Kubo and the Two Strings isn't like any other animated movie you'll see this year. While the breathtaking visuals and stellar voice-cast are beyond reproach, other top-tier animated films can boast similar accomplishments. Kubo distances itself by not only having a living, beating heart and soul, but a willingness to explore what it is to be alive...when everyone you care about is dead.

Despite living with overwhelming adversity in his daily life, Kubo is a good kid. A really good kid. When he finally reaches town each day (after a brutal hike from the cave he lives in with his sick mother), he earns what little money he can by wowing the villagers with brilliant tales of mystical heroes. While any good storyteller can make their characters feel alive, Kubo's actually are. Sort of, anyway, as he possesses the ability to make beautiful origami creations actually act out his captivating narrative. It's a great show, and even the most downtrodden members of his village get the chance to escape their troubles for a moment and be enthralled with the adventures of Hanzo the legendary samurai. Good storytelling, it seems, is pure magic.

But so are the evil forces that are coming after Kubo when he fails to come home before dark.

When Kubo was much younger, one of his eyes was taken by his grandfather (known as the Moon King), and if the boy is out at night, Gramps is coming down to complete the set. And after Kubo mistakenly/selfishly stays out too late one night, his completely terrifying aunts show up to collect the eye for their father. Luckily Kubo's ailing mother ain't having any of this this, and she intervenes and saves her son's life...while sacrificing her own. Now, this poor kid who basically had nothing to begin with? Now, he's got even less.

Kubo awakes in a blizzard and comes face to face with Monkey, a stern animal insistent on keeping him safe from the evil Moon King. There's something familiar about Monkey, but Kubo can't quite place it. Soon, they are joined by a paper samurai and a decidedly unsure giant man-Beetle thing, and all head off on a quest to find the three items that will protect young Kubo from evil: armor, a helmet and an unbreakable sword. And their journey begins...

While I wouldn't have a problem with anyone that didn't love Kubo and the Two Strings, I'd be crushed if they didn't really, really like it. Despite its awe-inspiring visuals and masterful use of symbolism, Kubo can be a bit laborious. For whatever reason (uh, likely all the death and loneliness), it can feel very heavy-handed at times...while simultaneously being full of small joys and big laughs. A story where everyone ends up dead that is still fun and beautiful along the way?

Not at all like something one should experience, here are the Yays and Boos. It's been quite some time since we caught Kubo theatrically, so keep in mind that also just like life...things that are unforgettable, can also be hard to remember.


Yaaaaaaaaaaaaay!
Booooo(o)o!
We (rightfully) opted to leave my daughter at home for this one, and instead let her have some time at the house without her older brother around. See, for whatever reason, Violet is an infinitely-worse child when her big brother is anywhere within a fifteen-foot radius of her. Instantly, she screams and demands that she was playing with whatever he was considering touching and that Matty has to get away from her RIGHT NOW!

This isn't going to last for the next decade, is it? She'll level out and become completely rational, right?

Wait. What's that? The truth is that it's never ever going to end...? Really? I wish you didn't tell me that.

Couldn't you have just made up a good story instead?

Email ThisBlogThis!Share to TwitterShare to FacebookShare to Pinterest
File this under Pulling Strings