I'm currently reading Ghost Boy, the memoir of a South African man named Martin Pistorius. When Martin was very young, he became sick with a mysterious illness that rendered him damn near non-existent.  As he sat in the corner unable to communicate or show any signs of basic awareness, everyone basically gave up on him. He could twitch, he could drool, but that was about it.

And so he sat there. Unable to let anyone know that his food was too hot, their hands too cold. For over a decade.

Perhaps worst of all, throughout his years in care-based institutions, there were times when he was not only physically abused, but sexually as well. The only solution he could come up with to survive this repeated trauma?

During the worst parts, he floated away into a void of nothingness, praying for the end. 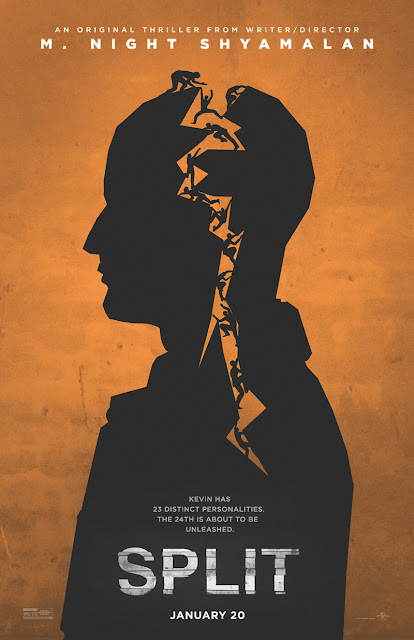 Turns out there's another dire solution to coping with years of abuse, something known as Dissociative Identity Disorder (aka Multiple Personality Disorder). In M. Night Shyamalan's latest thriller Split, this condition is front and center. But instead of a young boy in South Africa named Martin, our story focuses on a young man in Philly named Kevin.

When we first meet Kevin, he's actually Barry, one of his twenty-three distinct personalities. Under the watchful eye of Dr. Fletcher, Barry, er, Kevin is a fully-functioning member of society. He has his own place, a steady job, and it seems like he's keeping it altogether. For the most part.

About seventeen miles up the Schuylkill (or three hours, if it's Friday), three teenage girls are abducted in a parking lot at the King of Prussia Mall. They awake to find themselves in some sort of ramshackle chamber, windowless and dreary, minus an oddly impeccable bathroom. While their methodical captor definitely isn't Barry, he sure looks a Hell of a lot like Kevin.


Where Split could have easily been your typical pretty girls trapped by creepy guy hostage film, James McAvoy's fantastically unhinged performance elevates it to something much more inviting and tasty. The big reveal initially didn't make any f--king sense (or at least what I thought was the big reveal), but as in many of Shyamalan's films, you just got to hang in there till the very end. It may not be the dick-punch that was the The Sixth Sense, but it's high-quality ball tap, to say the least.

Also hurting your genitals in a variety of fashions, are the Yays and Boos. We decided to pull the rare Tuesday night cinema run, and were shocked to find the biggest auditorium in our shitty-little town entirely sold out. Good thing I have no friends and a cool wife. Cause the other way around would be the worst. I think.

Yaaaaaaaaaay!
Booooooooooo!
I'm almost near the end of Ghost Boy, and Martin has made it through one Hell of a journey. He has not only vastly improved his entire situation, but there is now a brilliant woman in his life (and it's consensual, no less!).

I'm not sure the same could be said for Kevin, though.

Or Barry. Or  Hedwig. Or that last guy.

But everyone's going to notice what they're up to.

Email ThisBlogThis!Share to TwitterShare to FacebookShare to Pinterest
File this under The Michael Jordan of Psychopaths