Even when the subject is repellent, the body can be tricked.

When me mum, er, when my mom gets sick, which is fortunately a very rare occurrence, I do what every loving son does: I call her after the fact and ask her how it went. And now that she's better, could she please watch my kids for me?

Cold and heartless? Maybe. But not by design.

But you daughters? Man, do you ladies go all out for ol' mom. Phone calls. Hot meals. Hot pads. Flowers. Cards. Cards with flowers on them. Enrolling in Russian F--k Schools and learning how to murder spies with your Siberian beartrap.

Honestly, at times, it's simply too much.

I don't know what you've heard by now, but Red Sparrow is a strange f--king bird, indeed. Starring some of Joel Edgerton and all of Jennifer Lawrence, this f--ker was not what I expected when I caught it a few weeks back (on opening night). Oh, it ticks the boxes of most thrillers set abroad in a world of spies and espionage....but it also ticks some I wasn't expecting. Namely all those having to do with whore school.

When Black Widow graduated Russian spy school, she got two things: a pistol and sterilized. I mean, it's way harder to scissor kick a bad when you're wearing a Baby Bjorn. At Red Sparrow's State School 4, while you're not exactly encouraged to get knocked up, you're basically trained to get down. At any time, with any body. You don't say?

Jennifer Lawrence plays Dominika Egorova, a former ballet star coerced into the role of undercover lover, as a way to finance her mom's incessant medical care. She's a quick study, though class is a f--king nightmare. No, really. It's a f--king nightmare. Literally. You know how you hate being called up front to give an oral presentation? It's the worst. But instead of a book report, at State School 4, it's a blow job.

After graduating, the mission is fairly straightforward (acquire intel from dude, f--k dude, report back to boss, f--k boss) and seemingly important to everyone involved. But the nature of the intel? The ramifications of getting it or losing it? Your guess is as good as mine. In fact, let's take a shot? *shakes shoddily made Russian Magic 8-Ball* Aw, I got All Undercover Agents Will Be In Jeopardy. You're turn. *shakes* What? Cold War Remains Frosty. Aw, I wanted that one! 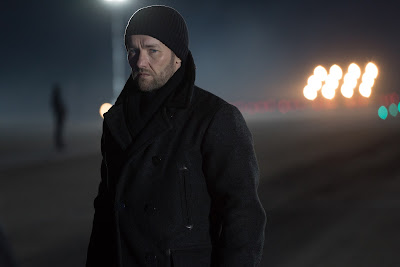 
Booooooo...
...oooooo!
After a (glorious) snow day today, it looks like I'll be begrudgingly headed back to work in the morning. My son's school (and Violet's too) has already announced they are closed tomorrow, meaning my wife will have to drop both of them off at my mom's house if she hopes to get any work done.

You know, I could stay home, if I needed to. Say, if my mom had a cold or something.

Wouldn't want to burden her with the kids.
Posted by m.brown at 12:09 AM