Y'all scared of a family?

In the not too distant past, I caught a compelling story on NPR about everyone's favorite group of people - the top 1%. Seems these ultra-rich dudes were looking around at the post-election state of affairs and collectively deciding they needed to get ready. Like really ready.

For what you ask? While some would say the apocalypse, others might call it the revolution, but however you want to phrase it, the idea was simple: if the economy collapsed the extremely wealthy would be targets. The less fortunate (aka the other ninety-nine percent) would come after them and it wouldn't be pretty. Their solution? High-end luxury fortifications. 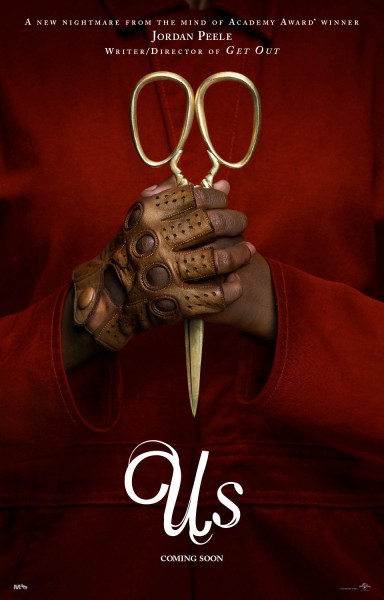 While Us might actually be an allegory about an entirely different topic, I couldn't help but think that somewhere along the way Jordan Peele had heard or read a similar story. Maybe it was before he wrote the script, or maybe it was while buying his own abandoned missile silo, either way I'd like to think this disheartening example of the separation between rich and poor was on his mind. I mean, after reading the bible and watching tons of classic horror films, that is...

After getting lost as a young girl on the boardwalk of Santa Cruz, we meet a now grown-up version of Adelaide Wilson (the impeccable Lupita Nyong'o), quietly dreading a return visit with her well-meaning husband and two kids. She's beyond hesitant, but agrees to go along as long as the entire family returns before nightfall. Her husband agrees, and after a slightly harrowing moment where they couldn't find their young son Jason,  they make it back to the house in one piece. Phew.

Turns out, that relief was incredibly short-lived, as four strangers show up outside of the vacation home and do the worst thing imaginable. They just sort of...stand there.


Eventually, the creepy-ass quartet break formation and enter the house, seemingly to hold the family hostage. Or something. While we all might've hoped that this was a simple home invasion/robbery-type situation, these red jump-suited motherf--kers have something far more nefarious planned. Oh, and further cranking the 'f--k this shit' meter to eleven? Each of the attackers is an identical version of the captive family. Well, almost. They're actually kind of a jacked up version of each. To quote another Peele film, No no no no no no no no no.... to all of this.

To say any more would ruin the fun, so my advice, if you haven't already seen Us, is to catch this f--ker on the biggest screen possible with the largest crowd you can handle. I've already seen it twice (a rarity) and found the second go-round even more entertaining than the first. Besides, after you check it out, you can, with absolute certainty, come back here and tell me my theory is complete horseshit. And when you do, I'll stand on your car until you say something to me, and then I calmly climb down and stab you in the neck with a pair of shiny scissors.

Speaking of things that don't sound all that fun and are likely illegal, here are the Yays and Boos. For Us. No, really. We're the only two who are going to read them.


Yaaaaaaa...
...aaaaaaay!
Booooooooo!
For the first time in forever, I actually sniffed out the twist coming fairly early on. I think it adds so much to the theme of the film, it makes me almost giddy just thinking about it. Well, assuming I'm even close to what Peele had in mind that is (I still think it's about poverty and income inequality, dammit).

If I'm right, or even just in the ballpark, that means we were rooting for the wrong person the entire time, right? Because the real hero was one of us. Just deep underground.


(Next to the Silicon Valley CEOs and the co-founder of Twitch.)
Posted by m.brown at 11:58 AM

Email ThisBlogThis!Share to TwitterShare to FacebookShare to Pinterest
File this under Versus Them