You f--kers that are lucky enough to not be (inner-city) (public school) teachers (with young children of your own) will likely never get it, but summer vacation can be a bit of a nightmare.

Oh sure, you get nine consecutive weeks off from being intermittently skullf--ked in each of your orifices by students and administration alike (the Natural Disasters ain't got shit on that tag team combo), but it's rare you get to really enjoy it. The time, not the...skull--, nevermind. . Uncle Ben may have said With great power comes great responsibility, but I think what he meant to say was with great freedom comes immense guilt. Or mo' money, mo' problems. Something like that.

Anyway, what I'm really trying to say is that this summer was one of the worst ever (I love my kids, but f--k me all I did was drive them places). Luckily, there was a magic week in mid-August where my children were back in school...and I wasn't. My wife was at work...and I wasn't. It was the best of times...but it was also the blurst of times. 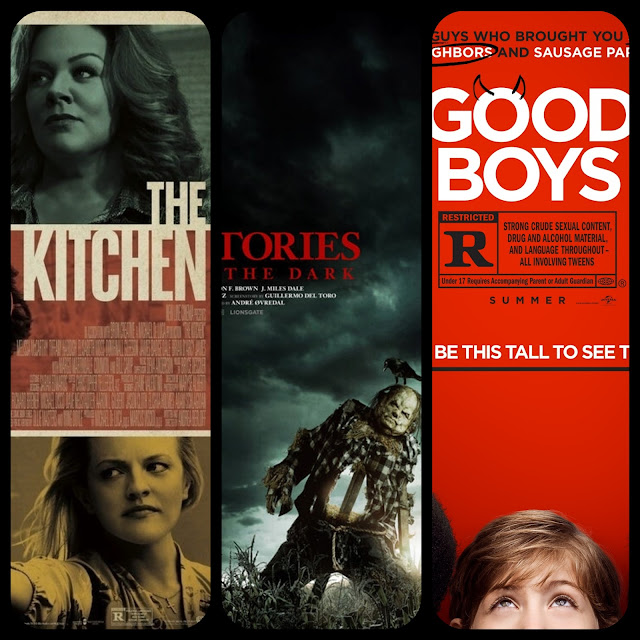 Of course I had some domestic duties to take care of that week, but whenever I crossed off the day's to-do list, armed with my minty-fresh Regal Unlimited membership, I headed directly to the cinema.

The good news, I caught three movies in five days, but the bad news? It was late August and much of what was available was leftover shit from the summer, or fresh turds floating atop the bowl. We all know end of summer is a January-esque dumping ground for Hollywood, but how mad can you be in a cold room on a hot day? Not very. Ish.

The Kitchen, up first, was f--king dreadful, to put it mildly. Imagine an extended Saint's Row cut-scene you can't skip, and might be in the ballpark. While Melissa McCarthy gives it a go (I don't even know what to make of Elizabeth Moss, who's kinda stuck on fuggedaboutit with an dishonorably discharged General Hux), Tiffany Haddish not only sinks the ship, but takes a dump in all the life rafts, too. There might be a cool story here about ladies taking over bits of NYC back in the day, but this unequivocally ain't it. It's probably funny like a clown on the re-watch, but I'd rather tell Tommy DeVito to go f--k himself instead of catching even a minute of this dumpster fire again.

Two days later it was Scary Stories to Tell in the Dark, which after The Kitchen, afforded director Andre Ovredal the chance to play with house money. Probably creepier than it should have been (but still not that creepy), this little flick would have killed around Halloween time, but for whatever reason...was released on August ninth (the f--k?). Based on books that kids read (apparently, kids actually reading is a thing), the movie version tells a series of connected tales that all end poorly. Scarecrows pitchforking bitches in the stomach ain't that half of it...and possible spoiler alert? I'm never eating soup again.

Finally, on Friday, it was Good Boys, the seemingly requisite inappropriate comedy of the year. For the most part, the trailers gave away all the (in)decent jokes, but if you're really amused by little kids saying naughty words, well, have I got a homeroom for you.

It's actually not that bad, but when Seth Rogen is involved - even tangentially- , I typically tell me wife and kids I love them before I head to the theater. Alas, it was not laughter that killed the beast, but fairly typical gags that weren't honestly all that shocking. Hell, the things I enjoyed the most were the sweet black kid (Keith L. Williams rules) and the hot high school chick (the twenty seven year old Midori Francis, mind you), so feel free to not only place that in your smoking device, but also to set it ablaze and inhale.

Though these three movies weren't everything/anything I was really looking for, the freedom of that final week was something I certainly needed (at least that's what I tell myself [but never in front of my, ahem, lovely wife]). I wouldn't see actual students for another week, but it wouldn't be long before it was back to meeting after meeting after...you guessed it...meeting.

But in a real shocking turn of events? When the kids did come back...? Unlike these movies...

Email ThisBlogThis!Share to TwitterShare to FacebookShare to Pinterest
File this under (Back to Back to) Back to School