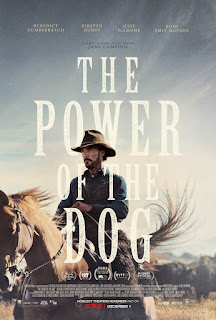 Then you tell them the truth. I stink and I like it.
Title: The Power of the Dog     Rating: R     Runtime: 126 mins Spolier-filled review to follow: Yes

What works: I'm pretty sure Jessie Plemons can do no wrong, and I adored him as the moderately sullen George. I've also loved Kirsten Dunst since the day I was born, and even if she exists in a raging sandstorm that only she can see, my feelings remain unchanged. Montana/New Zealand is gorgeous, and the stark setting makes the whole affair feel like a gotdamned horror movie at times. And as much as the ending enraged me, I'm all for feeling an emotion other than blinding consternation.

What doesn't: Cumberbatch occasionally sounds like the Grinch, and it intermittently derailed how much I was scared of Phil. George's stepson, the effeminate Peter, might be too-gay-to-function, as this poor kid's existence seems like a hate-crime waiting to happen. George, read the room, man...you're one paper-flower away from stopping my heart. There's a room full of uneducated ranch hands, maybe dial it back?

Yays: Whether I really knew what the Hell was going on or not, I at the very least will applaud the overwhelming sense of dread this film beats you over the head with. This f--ker was majorly upsetting. The cast is uniformly excellent, though Dunst was unintentionally hilarious at times (at times, she kind of traipses about like a sexier Bob from Schitt's Creek). As I mentioned, the setting is tremendously picturesque, even if that painting is something that nightmares are made of. And yes, the ending initially made me want to somehow burn Netflix to the ground, but alas, it has grown on me since.

Boos: Yes, it was tremendously suffocating and I almost had to look away, but there was something intoxicating about the play the piano for the mayor! scene. I'm booing it because it was horrible, but there's no denying that it also wasn't amazing in an awful, awful way. Also awful, was the handling of mom's drinking problem, which veered into silliness, which is unfortunate. I half expected her to suckle the teet of a cow she had secretly been filling with grain alcohol. My wife and I watched this over a couple of days (it's not exactly thrilling), so I didn't realize I needed to take notes on the effects of anthrax poisoning, but maybe that was a bit more obvious for you scholarly types. All the closeted love for Bronco Billy (probably not his real name) was awkward, because Phil seems like he's a pretty smart feller, until he talks about his role model, then he's Lisa Simpson calling the Corey Hotline. And finally, let's talk about that ending real quick, shall we? Phil has finally come around on young Peter (not literally), and that's when Peter f--king whacks him (again, not literally)? Seemed ill-timed, honestly. And the fact that he took such pleasure in it, made me think that Jessie Plemons might be next. And go for it Pete, kill as many bow-legged a-holes as you like, but don't you dare kill you Landry you sonuva bitch.

When I was a kid: Growing up in Hawai'i, the town I went to school in was surrounded by one of the largest privately-owned ranches in the world. We'd be late sometimes when the cowboys stopped traffic to let a million cattle cross from one side of the road to the other. And all these years later, god bless 'em, they're still f--king up my day.

Email ThisBlogThis!Share to TwitterShare to FacebookShare to Pinterest
File this under Blazing Saddles