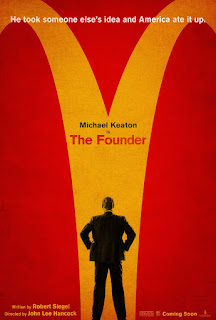 Yays: Ah, the 50's. I know, racist and horrible, right, but there is a slight bit of old America that could be mistaken for...charming? Just me, then? Say what you want about Croc, but there are some top-level chess moves here, you gotta admit. That tennis court rough-draft scene was awesome (and hopefully based on some level of truth). I think the line "Oh, that's some pure Dick magic" is low-key one of the funniest things I've ever heard (or read, as the subtitles were on for the students [to snicker at]). Speaking of Dick, ahem, he might be portrayed as the wettest of wet of blankets, but the guy had standards and wanted to do things the right way. Buttoned up? Sure. But also pretty damn honorable, too (and honestly, every McDonald's ever could use a little ship-tightening, you know?).

Boos: So, McDonald's invented the landfill, too - got it. Killing the drive-in was necessary, but can't say I wouldn't like it if a few more were still around (scratch that - I hate eating in the car - HATE-HATE). Unintentionally hilarious, but I've never seen a divorce sequence delivered so brutally. They could put that scene as a finishing move in Mortal Kombat 9000 and no one would ever bother it's so vicious. Whoever Patrick Wilson played got done dirty, which seems to be a Wilson hallmark. Oh, and whoever BJ Novak played...uh, we might need a bit more info about that guy, damn. And finally, I don't know if Ray is a true villain, but that final move was pretty hardcore. Yikes.

Two Yutes: I showed this in my Economics class, and at peak moments, I probably only had two or three people even looking at the screen at any given time. My face upon this realization? Grimace.

Email ThisBlogThis!Share to TwitterShare to FacebookShare to Pinterest
File this under Billions Swerved Daily