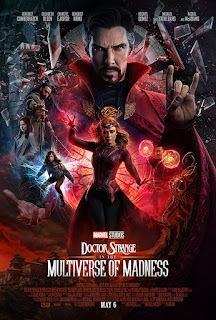 What doesn't: The Scarlet Witch. I'm not sure I'll ever be able to actively root against Wanda ever, ever, ever, ever...ever, but this is what I'm told we're supposed to be doing. I get all that she has given up, but what the Hell, guys - just give her an entire universe and keep it movin'. She killed her husband to save the world. Hell, make it a BOGO. Honestly, I'm torn. The more time with Wanda the better (the way better, frankly) but she went from superhero, to bereaved lover, to SIMS world champion, to incensed world destroyer like that. Maybe there's a heroic turn down the line...or maybe...we've run out of worthy villains (always a problem, this)? Whatever the case, Wanda seems to have gotten a fairly raw deal, but I guess that's in line with most of the ladies of Marvel.

For the Yays and Boos, let's bring in my two sidekicks, Matthew, age 12, a fairly sizable MCU enthusiast and his adorable sister, Violet, age 8, an absolute rookie in terms of Marvel live-action flicks (though I think she's seen Venom (oops!)).

NOTE: This post has sat dormant in my drafts since June 6th. My kids have long since forgotten whatever this movie was about, but I'm still going to ask them what they remember. For (maybe not) the first time, it looks like the Yays and Boos might be a bit of a therapy session.

Welp, turns out no one wants to talk about this. Matty liked it, though it might have been a little hardcore for his fragile, little mind. Violet shudders at the mere mention of the film, and uses it as a barometer for what she can withstand, both physically and emotionally. Dad, I saw Dr. Strange...I can handle this.

Email ThisBlogThis!Share to TwitterShare to FacebookShare to Pinterest
File this under Marvel Zombies