It ain't right and it ain't wrong. It just is.

Last night, my wife and I took my son to a monster truck show in Baltimore. He has been singularly focused on monster trucks since the day after Christmas (where we bought him nothing but Cars-related things, naturally). If my wife and I are speaking to one another, he will interrupt and say, "Are you talking about monster trucks?" When we answer no, we are not he emphatically replies, "Why not?"  This narrow focus/borderline all-consuming obsession is a family trait. Now, my unflinching devotion was never to over sized tires, no. I was consumed by one lovely young female singer, um, Jewel, of all people. You can't understand how bad I want to delete that last sentence. Whatever. She was so hot.

That said, I had never managed to catch 1999's Ride with the Devil. I had actually bought a used copy from a Tommy K's near school, but like so many movies I've owned in my life, I never got around to watching it. Ridiculous.

Not ridiculous, is this movie. I honestly really liked it. And being a decade removed from my obsession, I think I can say that rather objectively. If I had seen this in 1999, I probably would've had a tattoo of Sue Lee breastfeeding her daughter on my face. Let's just say we all dodged a bullet on that one. Seriously.

Being that it's Oscar night, let's get on to the movie, shall we? Director Ang Lee will forever reign simply due to the utterly fantastic Crouching Tiger, Hidden Dragon (which was his next film following this one). That film is probably in my top 20 of all time. It's likely I'll stop typing any minute and begin crafting my own Green Destiny in our shed. 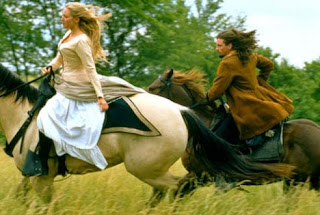 Devil isn't as awe-inspiring as Crouching Tiger, but it's pretty damn good. I know seeing Skeet Ulrich's name as arguably the most famous actor (at the time, anyway) might be troublesome, but fear not. Ulrich and the rest of the cast are quite solid. Yes, even Jewel holds her own.

The story, based on a novel, concerns itself with the Civil War and the revenge-fueled Bushwackers. Ulrich and Maguire join the cause, though the latter is a bit harder to classify. His character, Jake, is essentially the opposite of most everybody else involved.

Since I tend to ramble, I'm going to wrap this one up quickly (it's nearing showtime). How about a handful of Yays (no real Boos for this one), The-Dictator-just-dumped-Kim-Jong-il's-ashes-on-Ryan-Seacrest style? 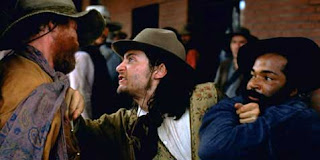 Yaaays
Enjoy the show tonight, kids. I haven't seen enough to make any picks. My gut is that The Artist is going to clean up, but Hugo has the most nominations. I'd love to see Pitt win, but didn't see Moneyball yet (it's in the house). If only there was a Best Picture flick about Grave Digger, I'd know that one inside and out.

Tell them you're wearing Kim Jong-il.
Posted by m.brown at 7:50 PM

Email ThisBlogThis!Share to TwitterShare to FacebookShare to Pinterest
File this under Who Will Save Your Soul?