This is too much madness to explain in one text!

The Super Bowl is in less than two hours. If the Giants win, I will be devastated. I will get some fireworks, a samurai sword, a barely-understandable British teenager and get on my bicycle and I will exact my revenge. Now this wouldn't be the first time this plan was put into action. But, um, probably the second... 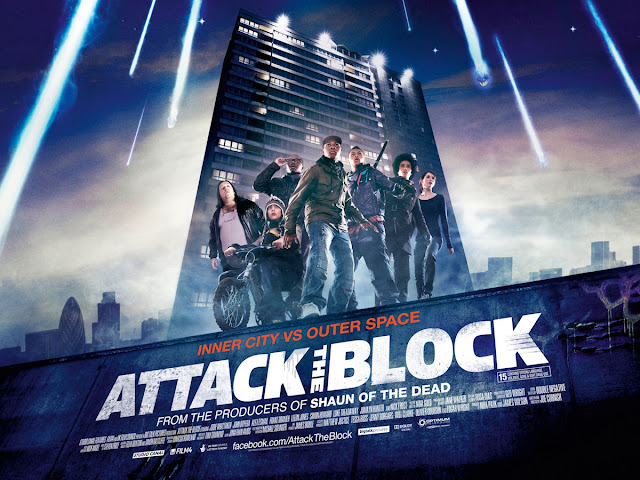 Attack the Block may have come out of nowhere when it was released last year, but seeing it at this point, there was plenty of hype. Aliens, badass kids with swords, and the mere mention of Shaun of the Dead was enough to redirect all movie-geek blood flow to the crotchal region. Yikes.

The movie begins on a firework-filled night in some sketchy part of the U.K. My first question, what the Hell are they celebrating? My sister joked that it was the 5th of November. Yes, apparently watching V for Vendetta lets you know everything worth knowing about British culture. Phew, glad I saw that one. Anyway, moments later something mysterious lands, and from there, the movie simply doesn't let up.

My next question, came minutes later. What would I do if I was attacked by an alien? Hopefully, I would gain fantastic alien powers like in District 9, but most likely would opt for running away and dying in the parking lot of a gas station. One of those two. What likely, wouldn't have crossed my mind is revenge.

Shockingly, jumping the shit out of this alien invader and parading his lifeless body around like it's an extension of your mammoth wang isn't a solid plan. In fact, that's going to really piss off/sexually arouse a whole race of glowing-toothed gorilla bears. And that ain't all peachy, is it guv'na?

Yaaaaaaay!
Booo!
Okay. Under an hour. Sorry, I phoned it in. Hopefully the Giants do, too.
Posted by m.brown at 5:44 PM

Email ThisBlogThis!Share to TwitterShare to FacebookShare to Pinterest
File this under Attack and Block