The world, as we know it, will soon come to an end.

If there was ever a moment when humanity as a whole knew the world was going to end, it's safe to assume that their would be a collective sadness throughout the globe. People from all walks of life, vastly different ages and religious beliefs would gather to reflect on their lives before it all came crashing down in an instant. And judging by an almost eight-hundred million dollar global box office haul, millions of us would be regretting the same thing: the fact that we each wasted almost three hours watching the God-awful, 2012.

I don't want to even get into the Mayan calendar ridiculousness. If you believe in it, awesome. I'm not sure you should be wasting precious time reading a crappy movie blog. You should probably be making sure your tinfoil hat is fully operational.

As far as this movie is concerned, the Mayans were right. So, secretly a plan is formulated to save mankind. If you're rich, you're in. If you're a giraffe, you're in. Had the focus been on this plan, and the construction of the arks, I might've been on board. But instead, we get the played out guy-who-lost-his-family-must-redeem-himself-during-world-ending-disaster story. You know, that old thing.

Seriously, I don't even want to keep discussing this movie. I'm tempted to bash all the actors involved but I can't blame anybody for taking work. Everybody involved made more money than I'll make this decade, but whatever. Good for them. Pricks.

Since I can't really think of any Yays (well, outside of the initial chaos), I'm just going to leave you with some Boos, unstable-crust style. 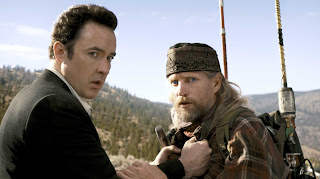 Boooooooooo!
But, hey, other than that, you should check this one out.
Oh, by the way...if reviews were golden rings, we just got an extra Sonic.
Posted by m.brown at 7:56 PM

Email ThisBlogThis!Share to TwitterShare to FacebookShare to Pinterest
File this under And I feel fine