I honestly didn't think that was going to work.

Twenty years ago, my older brother Bryan took me to see the first Independence Day movie. I distinctly remember three things about that day: 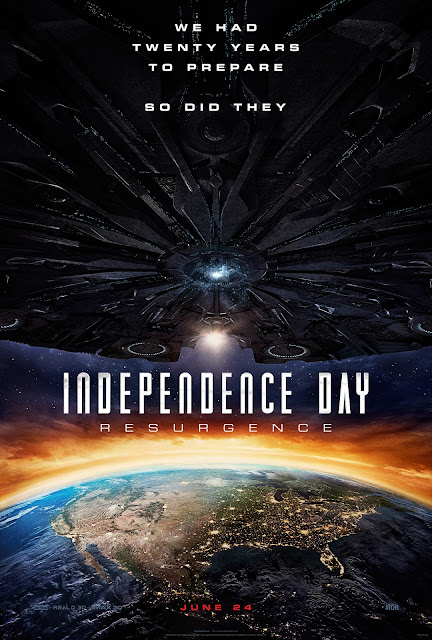 Last Thursday, or as we cool kids refer to it, opening night, I took my brother to see Independence Day: Resurgence. In 3D.

Bryan hadn't been down to my house in over three years and it just so happened the f--king stars aligned and we got a chance to go to place we hadn't been in two decades: a United States run by Bill Pullman. While my brother was genuinely looking forward to seeing the sequel, I can honestly tell you, I assumed it would suck a bag full of dicks. And it did. Like, a giant bag. Full of giant dicks.

Apparently in the two decades since the last invasion, the aliens have been getting ready for a rematch. Cool. Hopefully their new plans aren't foiled by a drunken asshole in the world's worst airplane, cause that would be a real bummer.

Back on Earth, we've all been sharing Cokes and a smile. It seems that destroying an entire race of tentacled aliens was exactly what we needed to put aside an entire civilization's worth of petty differences. And it doesn't hurt that they left behind some cool tech, too. See, if there's anything I've learned about humanity from these films, it's that a group of assholes trying to take over a peaceful people by force is un-f--king acceptable. Especially in America.

So, in an effort to make the world a safer place, we've gone ahead and put a military base on the moon, and with the help of some dumb f--king young and handsome pilots, attached a giant f--king death ray to it. Ah, safety. Well, one day, a mysterious figure shows up (think a giant, silver, perpetually contemplative Pac-Man) without warning, and in our infinite wisdom, we instantly blow the f--k out of it. And even better? We throw a giant party immediately afterward.

Turns out, ye old ghost gobbler was trying to warn us of an impending attack, and the real aliens show up. Again. This time they're back with an even bigger dick ship and a better plan. The ship is 3,000 miles in diameter! And the plan? Okay. The plan's pretty much the same.

In fact, so is everything else. But outside of the always-awesome Jeff Goldblum, every other aspect of this film is worse. Much worse, in fact. The holdovers that do return from the first one are hardly anybody we're thrilled to see again (hey! it's that doctor guy that looks like a coked-out version of Col. Sanders' younger brother/Arlo Guthrie!), but f--k, looking back? They're still the best part (but they're truly f--king terrible).


The new characters are all so one-note it's entirely laughable, as we're saddled with the likes of Handsome Dick, Orphaned Friend Guy, Will Smith's Kid, Asian Lady, Asshole Accountant and perhaps most unbelievably, African Warlord Dude (to name a few). All of them and their atrocious dialogue could be forgiven, however, if cool shit blowed up real good.

Sadly, the action is tame and pointless, with no shot being all that memorable or interesting. Yes, we get a moment or two where everything is destroyed in epic fashion, but it's nothing we haven't seen before. At this point I feel like a helpless bug doing the backstroke in the toilet, as a giant ass slowly blocks out the light (complete with ominous approach sound) before covering my entire world with an unbelievably thick layer of shit. Though, when you think about it, at least that bug got in that situation on accident. I asked for this mess. Again.

Also repeat offenders, are the Yays and Boos. They weren't with me back in 1996 when we hit that theater in Revere, Massachusetts opening day. Well, okay, the Yays weren't. I was sixteen. The Boos totally overwhelmed them.

BOOOOOoooOOO...
OOOOOOOOOOO!
One week ago, my brother and I saw Independence Day: Resurgence and there are three things I distinctly remember about that day:

Email ThisBlogThis!Share to TwitterShare to FacebookShare to Pinterest
File this under See You in 2036