We were very cool for our school district.

Stop me if you've heard this one, but my parents used to send me across the country to visit my grandparents for the entire f--king summer. Alone.

While my dad's side (located in Bristol, Connecticut) was all about dinner (at five?) together, planned outings, and a general sense of structure, my mom's side was the opposite. Temporarily residing in Charlestown, Massachusetts (not the nice part, either), the unspoken law of the land seemed to be, do what you want and try not to die. Oh, and dinner's whenever. Probably.

Being that it was hot as balls, and pretty much the f--king mean streets, I quickly came up with a plan. I would walk/run the two plus miles to the movie theater damn near everyday, and I would buy one ticket. And I would stay there as long as possible, hopping from one screen to the next. And in the summer of 1991, a movie I watched on more than one occasion? Madonna: Truth or Dare. 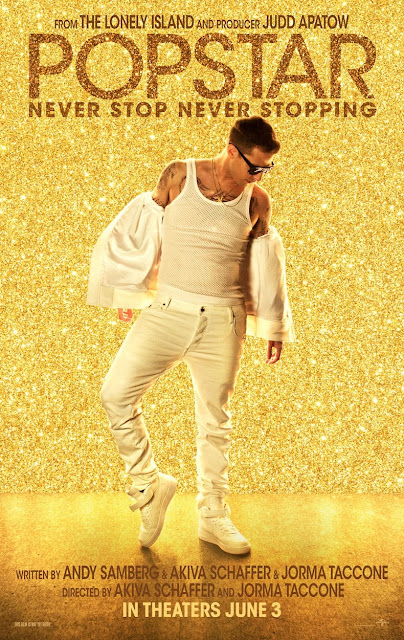 While Madonna sucking off a mostly empty bottle (I dare you click here) was part of an actual documentary, Popstar: Never Stop Never Stopping, while equally ridiculous, is straight fiction. At least as far as I can tell.

Conner Friel has musical talent. Or did. As the pseudo-documentary details, Conner has already experienced early, group-based success in the nineties (with the Beastie Boys-esque Style Boyz) and followed that with a meteoric rise as a solo-artist. Simply put, the world f--king loves this dude. And has for some time.

Like so many artists before him, Conner decides to turn his back on all the things that made him famous in the first place, including his long-time manager and childhood best friend(s). But when his sophomore album drops, the long-awaited Connquest, and is utterly f--king rejected by fans and critics alike, Conner folds like a cheap hooker who got hit in the stomach by a fat guy with sores on his face.

While there is a plot and a serviceable story, the real question about Popstar is whether or not it's funny. Well, you likely can't (and shouldn't) trust the grown up version of a perverted eleven-year old Madonna fan, or someone willing to drop a Friends quote two decades too late, but in my opinion, this f--ker was pretty damn funny. While not all the jokes are going to land, they come so friggin' quickly, it won't matter. Short version? I was consistently laughing my ass off.

Oh, and this one time? I almost choked to death on a dick...joke. As once again the big unit is played for even bigger laughs. Usually, I don't find other guy's dicks all that hysterical, but I'm telling you I actually cried during this scene. Unbelievable.


Speaking of guys obsessed with dongs, Samberg and the other dudes from The Lonely Island have delivered what I bet will probably be the funniest comedy of the summer (I missed The Nice Guys, dammit [so chill the f--k out, okay?]). Oh, it's f--king stupid, no doubt, but it's also f--king brilliant, too. Yeah, mockumentaries aren't exactly cutting edge, but Popstar might be the high-note to go out on, if and when this comedy sub-genre breathes its last breath (as if awkward glances are ever going away...).

Speaking of things that won't die, no matter how unfunny they get, here are the Yays and Boos for this Judd Apatow-produced, er, production. Like many an Apatow-diddled film, this one might be too long for its own good. Man...I really can't stop thinking about that dick scene, huh? Like, I want to stop, but I can't. Like, never.

YAAaaaAAAA...
...AAAAAAy!
Boooooooo!
After finishing Popstar: Never Stop Never Stopping, it actually made me think I should check out some legit documentaries about musicians. The live music, the stage show, being on tour, and all the backstage drama is fascinating to watch, you know?

Or maybe I should just revisit Truth or Dare, instead. I mean, I loved f--king Madonna when I was younger. Everyone did.

Wait. That didn't turn out quite right, did it? Something's a little off...

Kind of like the grown up version of a kid who sneaked into R-rated movies all day when he was eleven.
Posted by m.brown at 12:52 PM

Email ThisBlogThis!Share to TwitterShare to FacebookShare to Pinterest
File this under Just One Day Out Of Life