Trust me, once you go down there...you wouldn't wanna come back up again.

Everybody who grows up in Hawai'i has a shark story. Sure, it was probably a dolphin while you were surfing with your cousin, but it sounds way f--king cooler if it was a shark.

I guess I should have started this post with the word almost, because despite growing up in the middle of the Pacific, I routinely found myself in the middle of a movie theater. But one with a great view of the ocean.

Turns out I don't have a shark story, let alone a good one, unless I tell you about that time Samuel L. Jackson got eaten by a great white mid-f--king sentence! Or when that lady from Open Water was totally naked for absolutely no reason.

(Sorry, I don't watch a lot of shark movies) 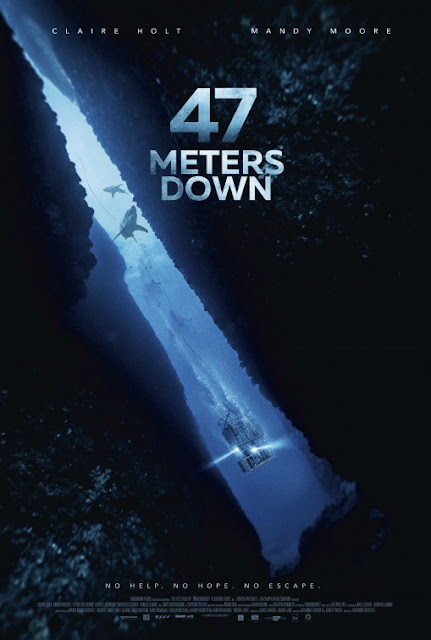 And after catching 47 Meters Down on Netflix with my wife the other night, safe to say I won't be rushing out (or in) to see anymore. While The Shallows [easily one of my favorite reviews] was f--king awesome a few summers back, Mandy Moore vs. a Shark is anything but. Good thing, like an actual shark attack, it's all over faster than you can yell Barracuda!

When we meet Lisa, the tall one (Moore), she has just been dumped by her boyfriend. Fiancee? Tennis Instructor? F--k, I don't know, someone she was previously in a relationship with. Apparently, she never let her hair down (anybody?), and homeboy had to cut her loose. So instead of non-alcoholic margaritas and super-protected missionary, this Mexican getaway is gonna be a pity party.

Filling in for the guy is Kate, Lisa's flirty younger sister. While Lisa is looking to wallow, Kate's looking to swallow. Sea water, you silly goose.

Anyway, after meeting two dudes who look like they might cut out your organs while you're sleeping, Kate plays the be a little adventurous card to Lisa, and basically double-dares her to go shark-diving with the fellas. What's a boring, overly-cautious, perpetual party-pooper gonna do? Well, like me pressing play on 47 Meters Down, something woefully against her better judgement.


The operation responsible for this ill-fated dive is captained by none other than Matthew Modine, who looks like all his seafaring experience came while he was the assistant manager of a Long John Silver's. Still, Lisa refuses to be boring any longer, and after lying about knowing dick about breathing underwater, jumps in a rickety shark cage with her sister. And that's when everything goes... exactly as planned.

Speaking of shitty ways to end something, here are the Yays and Boos. We're in for a tough stretch here at Two Dollar Cinema, so bear with us if the cheers and jeers are extra indecipherable.


Yaaaaaay!
Booooooooooo!
Whenever the Hell this film was released theatrically, I vividly recall that my wife -the woman that I love more than anything- suggested that we catch this one in the theater. Wait, what? Pay actual currency to go see the Mandy Moore shark movie? Um...I guess?

Let me be honest. I never say no to a movie. Or to the woman in my life.

Even if she says she wants to go to Mexico and swim with some f--king sharks. I would have her back in a heartbeat.

I mean, of course she can go. I'll stay at home with the kids. Maybe even take them to a movie...

Email ThisBlogThis!Share to TwitterShare to FacebookShare to Pinterest
File this under This Ain't Us