You have a choice. Scream. Or don't.

The Red Sox had just won the World Series for the first time in 86 years, and the Friday night before the victory parade, I dragged my cousin to the movies. Sure, Friday night at the movies was something we'd done a million times, but a Sox World Series parade was something we assumed we'd never see once. As we were both in the early stages of our careers in public education, we left the last almost-midnight screening f--king exhausted. Bleary-eyed ain't the half of it.

So tired, in fact, on the ride home we silently decided it would be a terrible idea to get up in a few short hours, drive a hundred miles north to Boston, only to freeze our balls off along the parade route cheering for Damon, Manny and Millar and the rest of the guys..

To be clear, we didn't go to perhaps the biggest f--king sporting event in our lives (up until that moment, anyway)... because I insisted we go see a f--king low-budget horror film the night before.

And they thought the 2004 Red Sox were idiots. 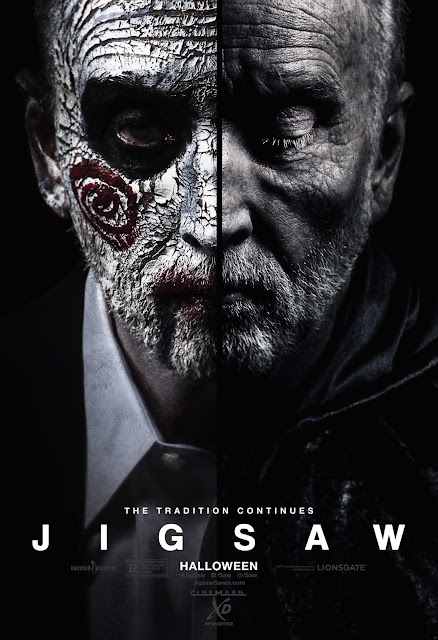 Saw and I didn't exactly get off on the right foot (I think there's a joke there) over a decade ago, so I'm not sure what would compel me to check out 2017's Jigsaw. I actually abandoned the series after the second entry, so jumping back in to part...carry the three...part eight probably wasn't the best call. But the wife was out of town, and the kids were at my mom's. What's a grown man supposed to do in that situation.

As far as my dim recollection goes, Jigsaw stays pretty close to the winning formula of the previous films. Terrible people awake to find themselves in even more, uh, terribler situations, and we get to gleefully squirm our way through each grisly demise.

Here, the crux of the film concerns itself with five a-holes chained to the wall of an extremely elaborate death chamber. Jigsaw, who apparently/supposedly died a decade ago, has channeled his love for OK Go videos, and created a seemingly endless (and super f--ked up) version of Mouse Trap. And unless you confess to all the sins you've committed in your mostly-shitty life, well, you gon' die. And it ain't a laundry basket that's coming down on your head.

It's a...well, it's a...it's a f--king laser.
Look, you can hardly trust me on a regular day, so to consider my opinion on a film that I was drifting in and out of and one where I failed to take the previous five prerequisite courses is an exercise in utter f--king stupidity. I'm pretty much one of those guys in college who only showed up to get the syllabus and take the final. And f--k those guys.

Speaking of people I generally hate, here are the Yays and Boos. We actually own at least three of the Saw sequels, but never even bothered to check 'em out. Yes, in addition to time and effort (mine and yours, honestly), I'm also totally in to wasting money, too.

I live in Pennsylvania now, and just in case you're not aware, there's been a tremendous amount of talk about a sports parade that recently occured in my area. Being a die-hard fan of all Boston-area sports teams (and a bitter prick), I immediately change the channel or shut the radio off when they start to discuss any of the events of the last week during the game. And when someone jokingly asked me if I was going to attend this f--king parade after the game, I thought to myself...f--k that.

I'd rather fall into a giant pit of syringes, instead.
Posted by m.brown at 1:14 PM

Email ThisBlogThis!Share to TwitterShare to FacebookShare to Pinterest
File this under I Need Some Tiss-yoos