Looks like we got a war on our hands.

Billboards, of any kind, are not allowed in Hawa'i. Banned. Outlawed. Not happening. F--k off, McDonald's. Eat a dick, State Farm Insurance.

But racism? Totally alive and well in the islands. You can hate Hawaiians (mokes), white devils people (haoles), Filipinos (flips), or pretty much any culture you can think of. We're typically more tolerant of everybody out there (the weather's too nice to give a f--k, really), but if you want to be a racist dick, go for it. Knock yourself out.

What they also have in paradise (though I've never looked for it myself)? Hell, the thing that probably guided my parents into dragging four boys 3,500 miles away from their schools and friends? 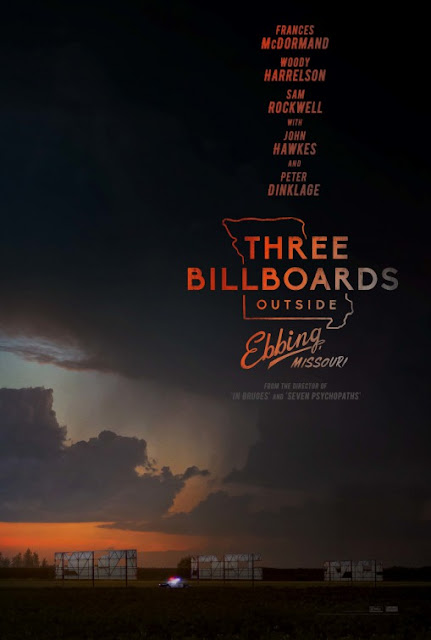 Missouri certainly ain't paradise, Hell, it isn't even Iowa, but Three Billboards Outside Ebbing, Missouri might just be the perfect film. At the very least, the perfect script. Crafted by the wickedly brilliant Martin McDonagh, Three Billboards is easily my favorite film of this past award season. I know, I know...and it doesn't even have a mute lady f--king a mer-man.

When the film opens, a few months have passed since Mildred's teenage daughter was raped. And murdered. Furious at the lack of movement on the case, ol' Momma Bear has scratched some money together to rent three billboards off the side of some backwoods road near her home. She's calling out the town sheriff, in hopes that her blunt words might light a fire under his ass.

Chief Willoughby is actually a pretty good dude, but he's sick, like, real sick, and the whole town ain't exactly keen with Mildred's tactics, even if you can't necessarily blame her. And right quick, bad things start happening to Mildred, but she sure as shit is not going to back down. Not even when the people who may or may not have helped her with those f--king billboards start to find themselves on the wrong end of the town's ire. Sucks for them, sure, but Mildred is on a f--king mission. Hurt feelings and bogus jail-time be damned.


I realize that in blogging/internet terms, this film came might as well have come out in the late 1970's, but I'll be goddamned if I'm going to ruin any of the surprises. At least up here (sorry, the Yays and Boos are nothing if not absolute spoilers). I saw this f--ker just a few weeks back, and was routinely floored by the twists and turns McDonagh's latest (and perhaps greatest?) took. Hell, I didn't even know Peter Dinklage and John Hawkes were in Three Billboards... so imagine my utter f--king elation when those fine gents showed up.

[And yes, I know their names are on the poster, jerkface. Well, I know that now. My name's m.brown not Encyclopedia Brown for f--k's sake. I'm looking for clues, not finding them...]

Speaking of obscure references that no one's ever going to get, here are the Yays and Boos. If you step back, almost everything every character says or does in this film is entirely reprehensible, but that's what makes it so much fun. These are deeply flawed people doing deeply terrible things. And I loved all of it.

I don't know how my life is going to end, and whether or not a time will come when I will seek some grand form of redemption like many of the characters in Three Billboards. I mean, I am a teacher for f--k's sake, if anything I expect droves of adults to show up at my chipped tombstone and apologize for the early grave their adolescent behavior likely doomed me to.

But what I do know? Where ever it is that I'll be buried...

Email ThisBlogThis!Share to TwitterShare to FacebookShare to Pinterest
File this under And It Opened Up My Mind