Look, no one cares about you now.

Ah, the things we do for the people we care about.

Some people will skulk around a deserted wasteland for days, where the only happy face they'll come across is pasted on their own narrow ass.

Others will get knocked up, gear up, and formed an armed militia of mothers-to-be. Cause, you know, there's nothing expecting mothers love more than brandishing assault rifles.

And others still, in order to maintain the existence of their own family, will do nothing but take and destroy life. Maybe it's the hunting of an animal to eat, or the murder of a fat man bartering gas for ass, you know, those old cliches. And maybe, if you're in a real pinch, maybe you'll cut the arm and leg off of a young woman...and cook that shit for dinner. I mean, the kids gotta eat...

But me? Well, I ain't really about killing anything...except time. So, if they ask me, (eventually) I'll watch a terrible movie for someone that means a lot to me. Well.. 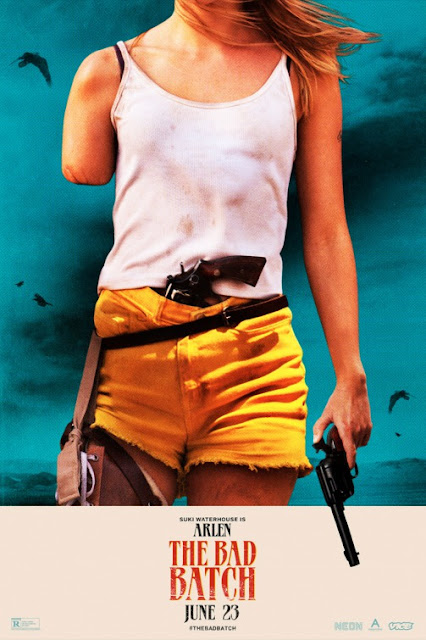 Fine, I still have nothing but love for Margaret over at the [at times] wondrously perverted cinematic corner, but after guilting/violently coercing me into The Bad Batch, the exact amount may be in question. I mean, sweet Jesus, this one makes Butter [review] look like Citizen Kane [review], for f--k's sake.

Apparently, a lot of people really dig/dug A Girl Walks Home Alone At Night (no disrespect, but I fell asleep every time I gave it a try). The film's director, Ana Lily Amirpour parlayed that success into her next feature, 2016's The Bad Batch. Obviously I can't say whether this one is a step back or a step forward, but if this is progress...holy f--k.

Set in a seemingly not-too-distant future, the film opens with some chick named Arlen getting branded as bad, and then unceremoniously dumped into a dry and dusty wasteland somewhere near Texas. Almost immediately, she's knocked out and wakes up to find that some gnarly bitch is cutting her arm and leg off. You know, because she's hungry.

Hey, Blogger Guy, why don't they just kill her and eat her other arm and leg, too (and ass, frankly)? Uh, because if you keep her alive, she'll grow new limbs like a f--king gecko, you dim-witted asshole. Stop trying to use logic, facts, reason, or any other nerdy f--king tidbit of that thing you call reality. Reality doesn't always look cool, bruh. The Bad Batch, does. Oh, um, also...if they killed her and ate her? We'd have no one to watch limp around the desert FOR TWO F--KING HOURS.

Look, judging this flick on anything other than how f--king rad it looks (and sounds) is utterly f--king fruitless, as any intense examination of The Bad Batch is going to end up with you feeling like an asshole, or sounding like a douche. If it were on seventeen monitors scattered all over the background of an underground rave where the sprinkler system covers the crowd in human blood, you'd probably think it was the best f--king movie in the history of time. But as the only plasma in my house is my one television, I found the whole thing an unnecessary indulgence in sexy people doing stupid shit.

Speaking of, here are the Yays and Boos. Fine, they aren't exactly sexy, but an unnecessary indulgence sums them up to a f--king tee.

Boooooo...
...ooooooooo!
Ask anybody who 'knows' me, I'm a terrible member of the blogging community. I hardly post any more on my own site. I rarely visit any one else's. Just a real f--king bastard, right? You should probably brand me unfit for society and cast me off to a depleted wasteland of degenerates and psychos.

Or, you know, just recommend me some more shitty movies.
Posted by m.brown at 11:38 PM

Email ThisBlogThis!Share to TwitterShare to FacebookShare to Pinterest
File this under The Adventures of Shirtless Boy and Legless Girl