I'm good for at least three or four a year.

One to two of them are adults only, meaning our anniversary or my wife's birthday. I say it's because she needs a break, but I think everybody involved (including my wife) sees through that selfless gesture. The other two are with the kids, and are usually the respite after a hellacious inter-state car ride that would make even Clark W. Griswold turn this damn car around.

Clearly, the whole point of staying at a hotel is to relax and recharge your batteries. But whether it's alone with my wife, or together with my kids...I'm typically ten times more exhausted checking out then checking in.

Even if the reasons are wildly different (ahem), when it comes to a hotel stay, I can't get a decent night's sleep. 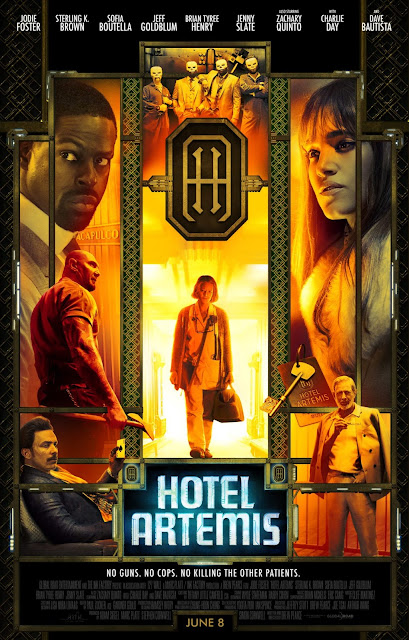 After getting less than nine hours sleep Monday and Tuesday night combined, I foolishly decided to celebrate the last day of school with a Wednesday matinee showing of Drew Pearce's Hotel Artemis.

I raced to the theater high on the smell of empty lockers and disinfectant, knowing that this flick was about to begin the nine weeks of heaven I had earned for the previous ten months of Hell. But being that I had (kind of) already begun the celebration with consecutive trips to see the Red Sox buttf--k the Orioles (getting home after one AM each night), I overestimated just how far pure f--king elation would carry me. In short, I fell the f--k asleep.

Not entirely, which would have been nice, but more like the way my grandfather would nod off at the dinner table: long blinks at first, followed by the slow and steady drooping of the head, culminating in that awful snap back + snarl/snort combo. What'd I miss?

From what I gather, Jodie Foster is The Nurse, a kind older woman who runs a hotel/urgent care clinic in downtown Los Angeles. Hiding in plain site, this facility serves criminals and all sorts of bad mamma jammas, but only for members that are down with a set of non-negotiable rules. Think that badass hotel in the John Wick movies, minus the class and charm. The Artemis is kind of a shit-hole.

After a bank robbery gone wrong, the seemingly honorable Waikiki (Sterling K. Brown) stumbles in with his brother Honolulu, who after a bit of a shootout, is all sorts of f--ked up. The Nurse is game, and she and her monstrous orderly Everest (motherf--king David Bautista, further cementing his near legendary on screen presence) get to work stitching this dude back together. But as anybody who has ever worked in a hotel knows (*raised battered hand*), you can't give all your attention to one customer. Even if the other ones are f--king assholes.

In addition to the brothers, there's a sexy assassin lady and a coked-out arms dealer at the Artemis. And all of these motherf--kers may or may not know each other. Well. But f--king things up further, word is that King F--k of Bullshit Mountain is on his way, and he's gonna need some serious attention. Not only is the Wolf King L.A.'s top crimelord, but uh...he also owns the f--king hotel. Ruh roh. The Nurse is gonna need the help. And not those ladies who shit in pies, supportive as they may be.

I'd like to say this moderately intriguing setup amounts to something, well, intriguing, but I won't. Or can't. I'm not really sure either way. I enjoyed the characters and some of the action was pretty f--king cool, but overall, Hotel Artemis didn't amount to much. Um, didn't you fall asleep, you clueless f--king a-hole? Maybe. But say someone shits on your pizza, right? You probably don't have to eat every slice to know it's disgusting.

Speaking of sentences that should never be constructed, here are the Yays and Boos. We thought about giving this flick another chance, but like a family of non-paying assholes I once waited on (with little kids and everything), it absolutely f--king vanished before I could get my shit together.

Yaaaaaaaaay!
Booooooooo!
Seeing that it's after two in the morning, I should probably get some much-needed sleep. Last week, we went away for three nights, and I took one for the team and slept on the pullout sofa. With my four year-old daughter. Who I'm convinced tried to burrow inside me like I was a hollowed-out tauntaun (to be fair, it was pretty cold in the room). And with my wife asleep on the couch, I've got the greenlight for a good night's rest.

And if you just read all of this? Hell, I'm pretty sure you're getting sleepy, too.
Posted by m.brown at 2:11 AM

Email ThisBlogThis!Share to TwitterShare to FacebookShare to Pinterest
File this under That ain't a mint on your pillow