I should have just went to sleep.

Yeah, I was a little bit spooked, sure, but it was late. No one would have questioned me if I had gone straight to bed.

But I couldn't get it out of my head, you know? There was no way I was going to fall asleep. Not with that massive f--king burden coursing through me.

So when she asked me how was it? I did the worst thing possible you could do to someone who doesn't like horror movies: I told her. Everything.

Why would you tell me this? Why?

Um, because trust me, letting you find out on your own is worse. Way worse. 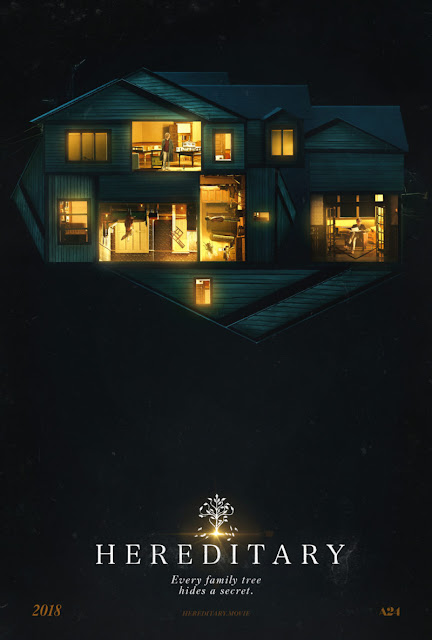 Hereditary, written and directed by Ari Aster, has pretty much permanently f--ked me up. I'm not sure I ever wanted to see some of the things I saw that night, and goddamn it, now I can't unsee them. And because of that, I really want you to see them, too.

I was (unfortunately?) raised on horror movies as a little kid so I'd argue my tolerance for scary shit is pretty high, but needless to say, I wasn't prepared for this one. As the film opens, Annie (Toni Collette, who I assume hates sleeping. And joy.) is giving the eulogy for her recently departed mother. Turns out, ol' grandma was a bit of a handful, and may have been batshit crazy. And grandma's favorite kid? It's not Peter, Annie's high-school aged son. Nope. It's Charlie. Annie's infinitely creepy middle school daughter who will straight-up haunt my nightmares til the day I die.

I know it's basically after the fact, but I'd still rather not spoil anything for those of you lucky enough to have not seen this film (still not sure if I should add yet to the end of that sentence). Safe to say the next hour and fifty minutes will absolutely knock you on your f--king ass, even if your audience was as shitty and distracting as mine. Sure, I left the theater hollow and a healthy combination of confused/disappointed (I initially thought it went waaaaay off the rails in the last twenty minutes), but after talking with my sister [who has seen this movie more than once] I think most of my questions have been answered. So if you've seen it, give me another minute or two of your time and let's talk it out below. And if you haven't? Good f--king luck.

Since the plot is basically off limits, let me just say that of all the sub-genres of horror, the one Hereditary uncomfortably resides in has always been my least favorite. Mainly because this type of shit is so relentlessly (and frankly, unapologetically) unsettling, you know? And here? F--k me, it's paired with such an awful/possible reality, I wanted to simply abort mission and call it a night. Oh, but not until I got the chance of going all Jason Voorhees on the back row... but more on that in a bit.

Speaking of not being able to shut the f--k up for two consecutive minutes, here are the Yays and Boos. As daunting as this f--ker got, I'm not even sure which is which, anymore. This is a horror film, right? So the things that made me cower in fear and disgust, are...Yays? I have no idea. Let me ram my face against this table a few times and get back to you/

Yaaaaaa...
...aaaaay?
Booooooooo...
...ooooooooo?
You wouldn't think I was dreading writing this post, but I was, simply because I didn't know what I was going to say. How many times can you type Hereditary is super f--ked up? And not really explain why.

But once I started, I basically couldn't stop. It was like I was possessed or something. Which sounds bad, until you realize whatever is controlling me has me typing mostly coherent sentences. Sure, the quality of writing is bad, obviously.

But it could have been worse.

Email ThisBlogThis!Share to TwitterShare to FacebookShare to Pinterest
File this under It Was A Piece of Cake