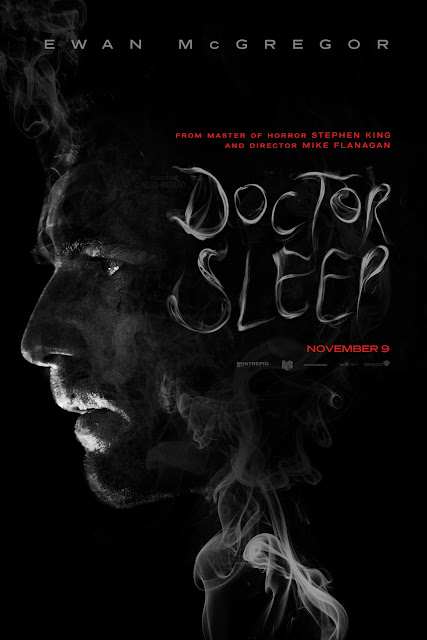 Turns out, Danny is a good man, Hell, maybe a great man, and ends up kicking all sorts of ass working in hospice care. His gifts allow him to communicate with (and ultimately comfort) his patients, providing a serene end for many, and in turn, earning the rad nickname Doctor Sleep.

Unfortunately for the good doctor, though crazy-fantastic for me (I was the only one in the theater, so yeah, me), his quiet life is upended, as he starts receiving messages from a young girl named Abra. This chick is basically the LeBron James of the shine game, and has sensed not only the existence of Rose and her crew (and their wicked intentions), but she's also caught wind of a brutal murder they've recently committed.

Even though she's as tough as they come (this is major understatement, by the way), Abra's going to need a little help from Danny. And if there's anyone that can mentor an mysteriously powerful young person, it's Ewan McGregor. Initially, he wants nothing to do with it, and just keep on keepin' on in his quiet like as Doctor Sleep. But as the horrors of Rose become more...tangible...he has no choice but to get involved.

Also having no choice in the matter, are the Yays and Boos. I'm not positive they can shine exactly, but I think if you spend enough time with them, the suggestion of taking your own life would seem pretty reasonable.

Yaaaaaaa...
...aaaaaaaay!
Boooooo...
...ooooooo!
Doctor Sleep was yet another film I almost managed to not see. I actually caught it on it's very last showing in my dumpy hill-billy town, and I'm so fortunate I did. Not only because it's really f--king good, but also, because like with King's books, my life can also be boiled down to three rules:

a) mysterious forces are always in play...when it comes to trying to watch movies at home
b) people are divided into two distinct camps, adults and kids (good and evil)
c) bad things were going to happen, if I try to stay awake past ten-thirty