Not merry, but it is lively.

I hardly remember new love. And those of you in it, or on the verge of it, in a way, I envy you.

That probably sounds like a terrible thing to say as a loving husband, but I've been with my wife for almost twenty years. That wild desire, that all-encompassing ridiculousness that consumed me (she was, if we're keeping score, way less...enthusiastic [initially?]) is long gone. It's not like we're miserable or anything, but part of the excitement of a new relationship - a new love - is that it's all so f--king mysterious. And that's either the fun of it, or the f--k of it. But my wife and I?

Oh, we solved those mysteries years ago. 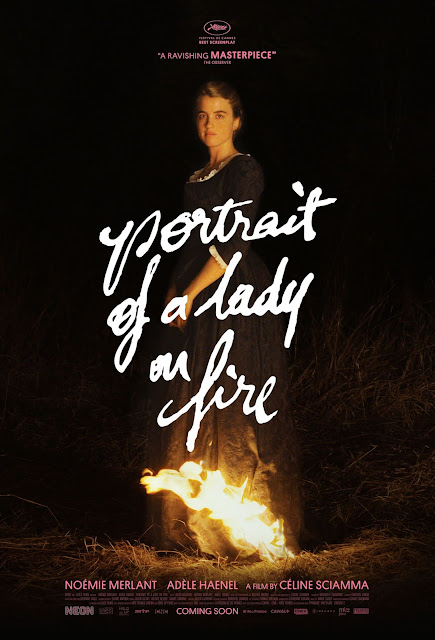 It's not that the thrill is gone, totally, but from where I'm sitting, forties love can't hold a candle to nineties love. As in seventeen-nineties love. And even if it could, it shouldn't. Because accidents happen and people could get, wait for it, burned.

While we both ponder whether we should keep writing/reading this post, let me just quickly say that Portrait of a Lady on Fire, from writer/director Celine Sciamma is unlike any film I've ever seen before. Granted, I don't watch a lot of, um, period pieces, nor do I watch a lot of French films. Oh, and I'm not into (mostly) silent films, either. But, hey, here we are.

Unbeknownst to me (and you, I hope), parents would commission artists to paint pictures of their daughters as means of marrying them off. It's not exactly romantic, or natural, but it sure is logical. And as the song goes, All you need is logic.

The exquisite Marianne (Noemie Merlant, current star of both my dreams and nightmares) is the portrait painter, and while female painters ain't exactly the routine, nothing about this gig is. Turns out, the subject, the impossibly aloof Heloise (the haunting Adele Haenel), isn't interested in sitting for the painting. At all. So, Marianne is gonna have to do this on the sly, basically stealing glances and locking them in her memory for a time when she can be alone. This is so much like how I rolled in high school, the whole remembering something specific and using it later, but I was working with a way different...canvas.

I'm so sorry you two, as I really did try to write something of worth, but you can see, as usual, it all dissolves into juvenile nonsense. I'd love to say something about the astonishing way the characters are developed without the use of dialogue, or to discuss the fascinating way the film is simultaneously sterile and romantic, or even kick around the idea that the title character is obviously Marianne, but all I want to talk to do is to place drugs into my armpits and just stare at you while my clothes literally burn off. Maybe it's the quarantine getting to me, or maybe it's the fact that I've always been an asshole, but either way? F--k it.

Bring me the Yays and Boos. Oh, and some warm bread if you've any left...merci.


Boooooooooooo!
I actually suggested to my wife that we watch this one together, but instead we started Tiger King of all things, which on the artistic spectrum, I'm pretty sure is Portrait of a Lady on Fire's direct opposite. Even at 44 minutes an episode, and even if it takes the mist insane twists and turns, she always falls asleep. And honestly?

Email ThisBlogThis!Share to TwitterShare to FacebookShare to Pinterest
File this under Impressive...strokes