We have officially finished week two of social distancing, home school, and whatever else self-quarantining demands, and the county we live in has just been ordered to shelter-in-place. That's not really the biggest of deals, as there really isn't any reason to go, well, pretty much anywhere.

My wife has been steadily working from home, so the kids and I have been on our own with entertaining ourselves, but recently, she emerged from her home office/our bedroom and suggested (/directed) that we watch something classic. The kids, who are clearly rookies, groaned aloud. I just nodded along. Sounds good, dear. What're you thinking...? 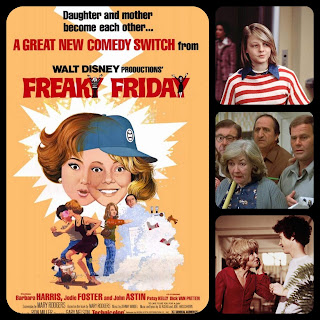 You've never called me Daddy before.

As previously stated, I grew up with two older brothers, so vintage Disney, unless they wanted to make fun of it, was off the table, resulting in many personal blind spots from Walt's vault. My own kids couldn't care less, but my wife sees these omissions in our collective filmography as something bordering parental failure. If only could switch places with her for a day, just someone who isn't my daughter.

Freaky Friday is so flippin' weird, and beyond problematic as a premise for a children's movie. Yeah, I get it, we should all appreciate each other, but changing brains opens the door for so much awful, it's hard to fathom. Seeing a young Jodie Foster admire her own mother's boobs from the inside out is something I'm not sure I'll ever be able to fully wrap my mind around. Equally as bewildering, is the sheer amount of ensuing hilarity that unfolds in what amounts to the longest day ever. Seriously, this is eight episodes worth of hijinks ramrodded into the longest ninety-five minutes ever. My goodness. Freaky Friday? It felt like Freaky February.

Yay: Even if she looks like a meth-head who might offer you something for a donut and some toilet paper, Barbara Harris is equal parts sexy and hilarious (she deserves better than reverse-Gomez).
Boo: Jodie Foster's extreme edginess gets old fast. She could have redeemed herself by punching that red-haired kid in the junk, but despite what Disney movies usually tell us, not all wishes are granted.
Homeschool Lesson of the Day: Staying out of mom's head is probably for the best. 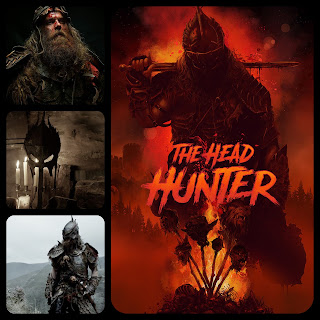 Vengeance is upon us.

You'd think just north of an hour would be a slam dunk in terms of a one-night watch, but Jordan Downey's thirty-thousand dollar flick knocked me the f--k out every time I cranked it up. It's not that's it's bad...it's just so...quiet. Which is odd, considering it's about a guy who collects the head of blood-thirsty beasts.

See, one upon a time some a-hole creature killed this dude's daughter, and when a far-off horn blows, our guy heads off-camera to kick some monster ass. When he returns, two things happen, he mounts the head to the wall...and he patches himself up. This self-care is worth mentioning, because whatever medicine he's been using, well, it's pretty goddamn potent. It would be a shame if it got into the wrong hands, or, more likely, the wrong heads.

Yay: The Head Hunter is an astonishingly beautiful film. Seriously, it's nothing short of stunning.
Boo: That beauty comes at a cost, or well, no cost, because 99% of what we need to see, we don't.
Common Thread (Adult Lesson of the Day): Sometimes the best way to appreciate your family is to literally destroy it.
Posted by m.brown at 5:23 PM

Email ThisBlogThis!Share to TwitterShare to FacebookShare to Pinterest
File this under (Oh) My Two Dads