I went to the movies at 9 in the morning. Pretty sure that's the earliest screening I've ever been to. Anyway, when I came home, my son immediately punched me in the balls. Honestly. I think he was trying to give me a hug, but was looking away, and he slugged me right in the junk. Likely, he meant well, but his grand gesture of adoration went awry and ended up a painful moment of shock and disappointment. 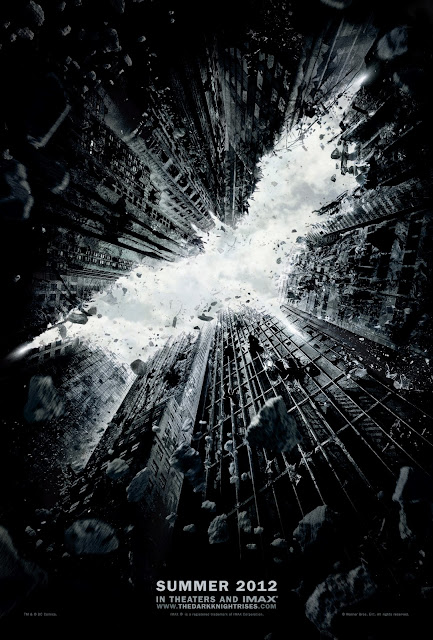 If you haven't gotten it by now, I was crushed with disappointment after seeing The Dark Knight Rises. Oh, that was obvious? Well, if you've seen this movie, you know that everything must be explained and shown fully to occur. I'm just following suit.

I went into full-on internet lockdown when it came to reviews (or even images) concerning the third film in Christopher Nolan's Dark Knight trilogy. This was going to be hands down the movie of the summer, if not of all time. You can laugh at the absurdity of that all you want, but I was f--king hyped. And when I left the damn-near three-hour epic, I was in shock not only because the movie wasn't even close to being that good. Honestly, for a minute there, I thought it wasn't good...at all.

In the hours that have passed, I've come down a bit from that movie sucked, to more of a blaming myself. I scrolled through Rotten Tomatoes and saw one glowing review after another. One guy even was calling for Best Picture. Best. F--king. Picture. Did I miss something? Did I see a workprint by accident? Because the version I saw was one of the most illogical and hollow great movies I've seen in a long time. Just thinking about the final third of the film baffles me. Completely.

Look, I'm no professional here. Not by a long shot. And I know that if I truly love a movie, it doesn't matter what you say about it. You won't change my mind. But while I'm always open for a discussion, I don't think you'll ever convince me that this flick isn't insanely ridiculous (polite way of saying stupid). Yes, we're talking about a comic book movie, got it, but Nolan had elevated Batman to a level of legitimacy and awesomeness that both surprised and floored me. Shit, judging by box-office numbers, us. I know my own impossibly high hopes are responsible here, but so too is Nolan for creating two excellent films prior.


In light of everything, I'm not in the ballpark of being mad or whatever (getting pissed either way is foolish). Just, as I've said, disappointed. I wanted to go out with a bang, and this feels more like a thud. I genuinely love everyone involved and think that there were some really cool parts and some clever exchanges between characters, but my f--king brain wouldn't let me enjoy it in the end. Despite what Commissioner Gordon says, there were too many coincidences, too much spelled out and entirely too many scenes void of any semblance of logic. Read on if you dare, but there are plenty of spoilers ahead. And guano. Lots of guano.

Might as well fire up the ol' Bat-Signal and break this one down. Here are the masked Yays and gravel-voiced Boos, Maybe-Nolan-was-just-tired style.


Yaaaaaaaaaaaay!
BOOOOOOOOOOooooooo!
Look, for many of you, I'm telling you your baby's ugly. Not cool, I know. But I am at such a loss to the universal love bestowed upon this one (it has the highest user rating I've ever seen on IMDB, right now). I don't know what to say. Maybe I was in a bad mood, maybe I'm an idiot and an asshole....or maybe...

Email ThisBlogThis!Share to TwitterShare to FacebookShare to Pinterest
File this under But I'm Probably Wrong, The Avengers Just Got Better