I need you to put this in your bottom hole.

Way back in the fall semester of 2000, I completed my college internship at a rock radio station in Connecticut. As much as I wanted to be on air, I ended up allowing myself to get stuck in the promotions department. Other than the occasional free Limp Bizkit CD, the real perk was working at the bars with the DJs. I'm not even sure what they did to get the crowd so crazed, but I do remember it almost always ended in topless women. In a surprising turn of events, and contrary to 99% of this blog, some breasts are actually horrible. But anyway...

...one night, after a concert, I remember we had a problem. The lead singer of The Mighty Mighty Bosstones, Dicky Barrett, needed a ride to his hotel. Under his right arm, was his wife. Under the left? Some seemingly random chick. The problem? Pretty much everyone there was completely shitfaced - except me. So when they asked if anyone could/would do it, I raised my hand. In the span of five seconds, I imagined that the four of us would end up in my VW Beetle driving around Hartford in the middle of the night. I would drop them off and in a show of gratitude, Dicky would invite me up. And in my mind, it was highly probable we would all end up having sex in disgusting fashion. It was going to be awesome. 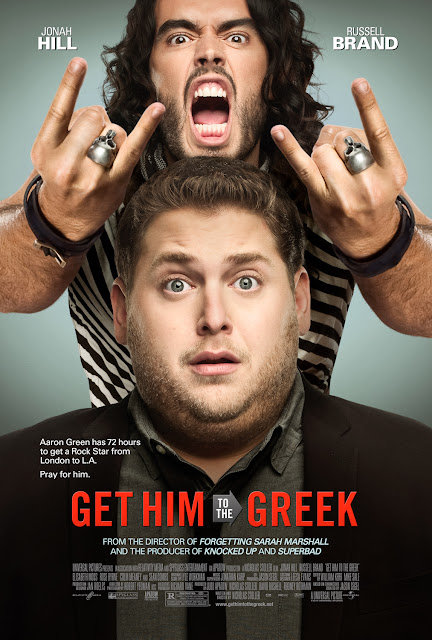 Not as awesome, though still pretty entertaining, is 2010's Get Him to the Greek. In limited action, Jonah Hill and Russell Brand were hysterical in the earlier Forgetting Sarah Marshall. But here, it seems they do less with significantly more screen time. In fact, in a weird trend, it's actually Sean Combs minor role as their boss Sergio, who provides most of the laughs. Though, let's be clear, if he gets his own spinoff movie, I'll likely take my own life. Well, after watching it, anyway.

Just in case someone out there doesn't actually know it, the setup is simple. In fact, it's summed up perfectly on Hill's right shoulder over there. The only thing they leave out is the fact that Brand's character, Aldous Snow, spends those 72 hours drowning in self-pity. Turns out, his last album was an utter trainwreck, featuring the ill-conceived single
African Child. Worse yet for Snow, in the ensuing bottoming out of his career, he lost his super hot girlfriend, Jackie Q (played by the delectable Rose Byrne [if you're a fan of hers, check this out from FTS - zoinks!]. There is a silver lining to being sans girlfriend, though, for both of them actually. I'll let you figure that one out.


Like damn near every movie ever made, your enjoyment of this flick rests solely on how much you like the actors involved. Brand, though a bit odd, is clearly a frickin' genius. His wide-eyed/surprisingly controlled lunacy has always entertained me, so I'll go ahead and vouch for him. And Hill? The more I see of this dude in starring roles, the more I think he's f--king hysterical, too. Both give solid performances that are easy to root for, but for whatever reason - it all adds up to okay. I didn't hate it, but I never need to see it again.

Which is likely the same way people describe most of  the content of this blog or say, my current face (more on that in a bit). Anyway, here are the Yays and Boos. Before you continue, make sure you check their rider. When they travel they always ask for ice cubes and a nine iron. Oh, and a buffalo. Live or stuffed. Preferably stuffed, for safety's sake. 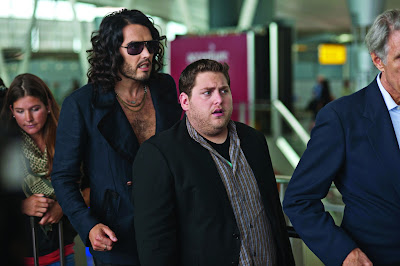 Boooooo!
While ultimately this movie fizzled into nothing special, the same can't be said for that magical night back in 2000. But more on that when you're older.

Okay, fine. After volunteering to give them a ride to their hotel, some c--kblocking/disease preventing genius decided to ask me, in front of everyone no less, do you know how to get there? And upon my slight hesitation, the job was immediately handed over to someone with a better knowledge (even inebriated) of downtown Hartford. And that guy likely got the great story to tell. Me? I just got the beginning of one.

Didn't even get to the climax.

Email ThisBlogThis!Share to TwitterShare to FacebookShare to Pinterest
File this under Night Rider