They push me so far that...that I...I want to become the bully.

Though I still have a hard time believing it, school's out. Despite there being a couple of times I didn't think we would, we actually made it. Mission accomplished.

This year, for the first time in my career, I actually attended a graduation comprised of former students. Of the seventy two graduates, I taught six of them all the way back when they were eighth graders. And by eighth graders, obviously I mean awkward, bumbling, thirteen year-old kids, doggedly unaware of their actions. And as they walked (well, sauntered) across the stage as fledgling adults, I was consumed with two feelings. The first, not too shockingly, was pride. But the second? Relief. Overwhelming relief. 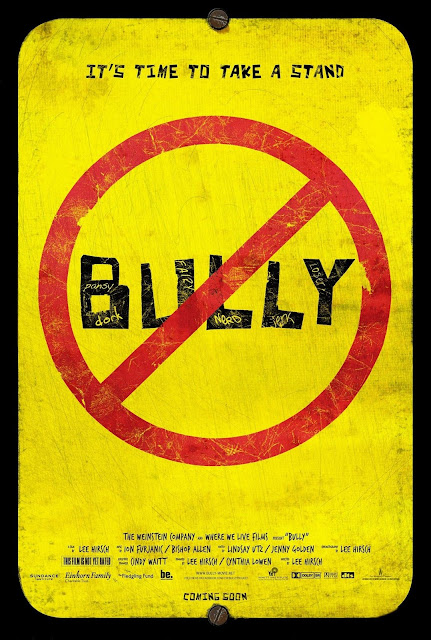 Bully, at least early on, absolutely destroyed me. The documentary opens with a father looking directly into the camera and detailing the events that led to the suicide of his young son, Tyler. For at least the first half of the film, this overwhelming sense of sadness and anger permeates every aspect of Bully. It can be pretty tough to watch at times...

....which is why I showed it as the end-of-the-year film in my English class. It was seven-eighths something they needed to see with a dash of maybe they'll actually be quiet and listen. And outside of the occasional verbal outburst, this film succeeded on both fronts.

Bully tells six separate stories of varying intensity, some more effective than others. Here's a quick rundown of the first four:

Tyler: Perhaps most grueling, this segment details the suicide of a seventeen year-old kid after years of bullying. Tyler's parents seek justice from the school board and the district to limited results.Their story anchors the documentary.

Alex: The face and star of Bully, this story evoked the biggest response from my students. See, Alex is a painfully awkward kid trying to navigate the treacherous waters of sixth grade in Iowa. He's presented as a shy kid, a real goofball, in desperate need of a friend. Sadly, Alex appears to confuse bullying with his friends messing around.

Kelby: Your typically aloof sixteen year-old, Kelby just wants to hang out with her friends and maybe even play a little basketball. But, in her small town in Oklahoma, her homosexuality makes even the smallest task a borderline impossibility.

Ja'meya: After constant torment at school (and on the bus) in Mississippi, Ja'meya decides to do something about it. Though her intentions were to just scare them, Ja'meya ends up in a psychiatric facility awaiting trial for a sentence that could last hundreds of years. Keep an eye out for the response from law enforcement, as that sent my classroom into a frenzy of disgust and disbelief.

Not to slight the other two stories, but in a potentially failed attempt at brevity, let's wrap this one up with an abbreviated Yays and Boos section.


Yaaaay!
Booooooo!
As I watched my former students walk across that stage, the relief I felt was that those kids had, for the most part, made it.  School can be daunting for a host of reasons, bullying included, but knowing that whatever pressures and problems they went through weren't enough to stop them, made me exhale more than once.

The rest of your life won't be easy, trust me. But you owe it to yourself to find that out firsthand.

Email ThisBlogThis!Share to TwitterShare to FacebookShare to Pinterest
File this under School's Out For Summer/Ever