Save your children. Take me outside.

Every year, without question, I participate in a cult-like tradition that divides my family. I feel like it's for the greater good, but my wife and friends think it's terrible and unnecessary. And despite it making me look and feel like a crazy person, there's something cathartic about gazing into the mirror and seeing that I've truly let go. Once a year, I distance myself from the pressures of adult society and succumb to a more primal state of being.

In other words, I grow a playoff beard. 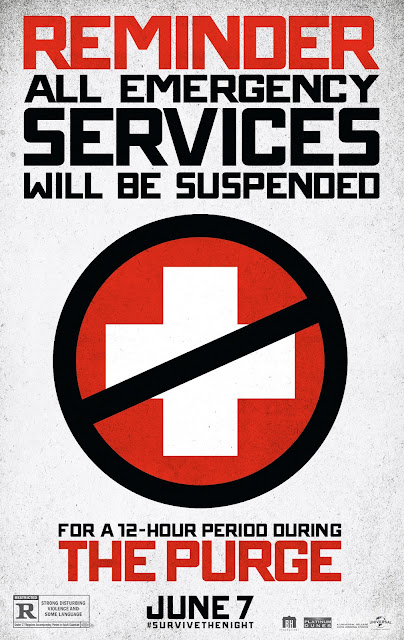 Similar to my annual facial-hair disaster, The Purge may be slightly better in idea than execution. An impossibly clever setup ultimately ending in thriller-movie goofiness, this flick is better before you actually see it. And if you happened to catch the highly-effective trailer? You might be good. Just sit back, search your brain for any home invasion movie you've ever seen, microwave some popcorn, have the well, what would you do? conversation with your friends and save yourself ten bucks. Done.

But, if you do go, like my brother Nikos and I did, you'll probably enjoy yourself regardless. The Purge is breathtakingly brief and never really lets up. Yes, you've seen Dad defend his family from sick f--ks countless times, but at the end of the day, it's still fun. This logistically impossible idea of a twelve hour window of madness may be such a good summer movie idea that it's hard to resist. But it's also hard to end, too.

Though the movie is far too silly overall, I actually appreciated all the things it says about class and culture. The short run-time doesn't really allow for any personal reflections or anything (not that that's what fills seats in June), but I really got into the countless moral questions and ambiguities. It made for some solid post-movie conversation. Personally, I don't even kill spiders, much to my wife's chagrin. But given a chance to murder say...the guy who pulls out in front of me when there isn't a single f--king car behind me for miles!? That kind of sounds enticing, if only just a little bit. But then again, I am a teacher. There's probably forty five kids that would surround my house on the night of The Purge. Imagine the next day at school?

Speaking of vengeful punks, here is the latest round of Yays and Boos. We've been watching so much hockey lately instead of movies, they feel kind of left out. They don't get that the potentially winning the Stanley Cup is the biggest Yay possible. And the fact that this year I'm opting in on mustache? Huge Boo. Huge.


Yaaaaaaaaaay!
Booooooo!
Much like Ethan Hawke in this movie, I too, have a great wife. Not only is she cool as I leave her and my son to head to the movies to see whatever, but she's also supported my annual obsession with the Boston Bruins and their quest to win the Cup. Lucky for her, there's no game tonight. But not so lucky for her, that's another twenty-four hours the beard (ugh, and the mustache) gets to grow.

But a week from now, win or lose, I will remove the undesirable hair by force, and cleanse myself of the beard. Now that's a purge we can all support.
Posted by m.brown at 5:42 PM

Email ThisBlogThis!Share to TwitterShare to FacebookShare to Pinterest
File this under This is my house I have to defend it