I'm starting to think this is the most spiritual place I've ever been.

In college, I really never had any money. It wasn't all ramen noodles and bagel bites, but the truth is, I never worked during school. I made all my money waiting tables at an outdoor restaurant not-so-cleverly named Hang Ten (where I had to answer the phone by saying Aloha! like a true asshole), which happened to be located just under five thousand miles away. Meaning during Christmas and summer break my bank account went up. Way up. But during the semester? I had to be cautious. Once, one time, I said f--k it. I'm going on Spring Break like everybody else. Destination? Chicago. 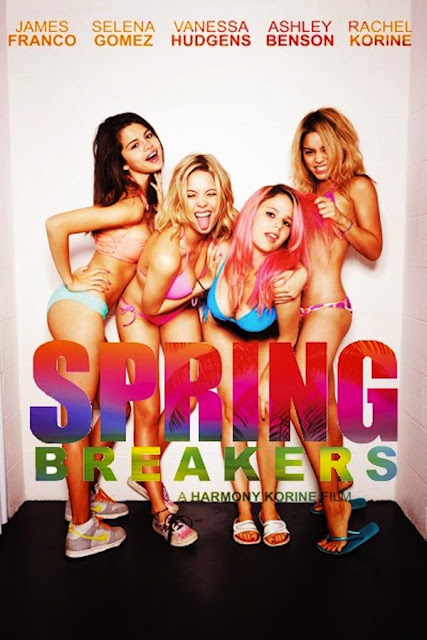 That's not what you were expecting, huh? Well, neither was the film Spring Breakers from director Harmony Korine. What I thought was going to be a throwaway flick featuring hot chicks shaking their asses, turned out to be something entirely different. Oh, the chicks are still hot, and asses are definitely shook. But after that is something about as surprising as going somewhere colder for Spring Break. F--king dummy.

Anyway, Spring Breakers, on paper, is simple enough. Four college girls, by less than savory means, get some cash together in order to leave behind their shitty lives at their shitty college, and go on f--king spring break. They head to Florida, and quickly get vag-deep in some insane partying and unfortunately get locked the f--k up. Crazy? Sure, but at least at this point things are still manageable. But seeing as our fearsome foursome haven't got shit on them except for some skimpy bikinis (no complaints here), making bail is going to be a bit difficult. Luckily isn't the right word, and neither is fortunately, but somehow the girls get sprung. Good news, right? Well, not exactly. Seems their liberator is a bit of a character, with likely more than a random act of kindness as his motivation. Hmm, I wonder what he wants?

To tell you anymore would ruin it, but I'm not sure the plot really matters anyway. Spring Breakers, regardless of what you think of the film as a whole, shines in its presentation. Unfolding like a dream in neon fragments, sounds and images spiral all over themselves, creating something unique and memorable.

Notice I stayed away from enjoyable or incredible.

For me, the experience, while oddly intimate at times, was hollow. While I initially signed up for more salacious reasons, I was hooked when everything became life-or-death. Seriously, it gets pretty f--king intense. But, in the last ten minutes or so, it goes to a place that I found laughably absurd. All the tension climaxes in such a silly way that it undermines the fascinating foundation built in the previous hour. And while that final scene may have had me cringing, there was one thing I didn't do - blink. Sure, it came off like a bonus mission in Saint's Row, but that doesn't make it look any less awesome.

Speaking of a lackluster end to something, here are the Yays and Boos for Spring Breakers, or as its known around here The first movie we ever reserved at Redbox. 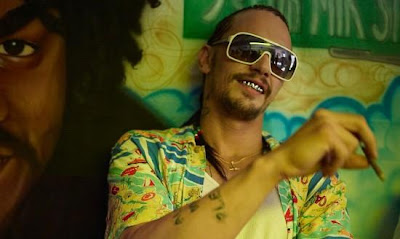 Yaaaaaaaaaay!
Booooooo!
Look, here's the deal. The more I think back, the more I kind of like how f--king strange this movie was. It was almost like actually being hypnotized. Weeks later, I'm thinking hey, that shit was a good time. But right after it happened, I didn't like really care for it. I was thinking, what did I just do? Hopefully something I won't regret years later.

Like spending Spring Break in Chicago.
The Windy City for f--k's sake.
Posted by m.brown at 2:02 AM

Email ThisBlogThis!Share to TwitterShare to FacebookShare to Pinterest
File this under And the Bulls Were on a Road Trip