That's what it said on the screen. Years ago, I had attempted to withdraw twenty bucks from my Webster Bank account so I could get food on my lunch break, but apparently I didn't have any money. Shit, no money would have been a goal at that point. I owed bitches. Lots of them. Worse? I worked at f--king Webster Bank. That's some bullshit. 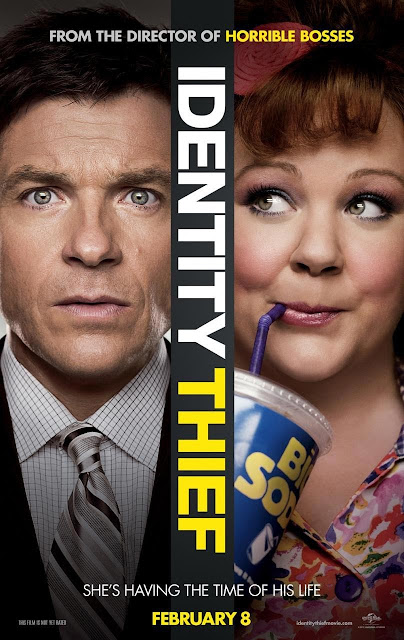 Much like how some ratf--k piece of garbage went into my bank account too often, I went to the Melissa McCarthy well more than I should have, too. To be fair, I only overdid it by one. I didn't take every dime some poor bastard had rendering him totally f--ked for a week while they investigated the alleged wrongdoings. I just Redboxed a movie. A not-very-good one.

After laughing my ass off throughout much of The Heat [review], I had high hopes for Identity Thief. Sure, that sounds pretty frickin' ridiculous now, I get that. But as the Universal logo spun around that globe, me and my lady friend were looking forward to a good time. Keeping with the trend of this post however, it would appear our fun would be crushed by some nameless, invisible force miles away from my current location.

Despite a slew of talented, likable people involved, Identity Thief feels like it's missing something. And that might be putting it mildly. There are a few laughs, some so-so action, and a somewhat inspired setup, but it doesn't amount to much and never really comes together. The reason? As unfair as it may be, is likely McCarthy. Not so much her personally, but her character Diana. This lady might be the most unlikable bitch ever put to screen that we're supposed to like.

Not that it'd surprise you looking at that poster, but you're going to have to swallow a big bite of f--k it if you plan on enjoying this one. The identity theft itself is clever and all-too believable, but the rest of the movie resides in a reality reserved for bad sitcoms and below average movies. Sandy (the always enjoyable Bateman), an affable family man, is about to lose his job in finance when it comes to light that he's been spending money he doesn't have. The fact that these shopping sprees all occur in a state he's never been to does little to pacify his boss or the cops. His brilliant plan? He's going to go get the person ruining his good name (and good credit) and escort them back to Denver, proving his innocence. This plan barely convinces anyone in the film let alone anyone watching it. From there, it basically becomes an average road-trip movie, saved only by how much you enjoy the two leads.

Clearly, the plot is secondary to the jokes and the naughty bits. Much like my own plot summaries, come to think about it. So, let's give the good people (or should I say person) what they want - and go ahead and get right into the Yays and Boos before someone gets punched in the throat.


Booooo!
While this movie had a few laughs, actual identity theft is no joke. The shit-faced c--kmasters who stole every dime I had totally f--ked me. For about two weeks, I didn't have any money. F--king zero. These bitches were out dropping $600 bucks on shitty groceries, getting their shitty car new tires, buying $500 worth of shitty clothes, and another $400 in shitty gas. Meanwhile, the bank takes their sweet time investigating all the fraudulent charges, while I sat their penniless and unable to pay any of my own bills. Or fill my gas tank. Or, buy my own groceries. Luckily, I had my girlfriend to fall back on.

Relax, I paid her back. Not only the cash, but she got a new identity, too.

I gave her my last name.

Email ThisBlogThis!Share to TwitterShare to FacebookShare to Pinterest
File this under No. The Card was in my Possession.