There's nothing wrong with me, Chet!

In certain sports, the use of performance enhancing drugs seems so commonplace, that it barely even registers emotionally when somebody new gets busted. These athletes risk long-term health by juicing their bodies with chemicals simply for a shot at momentarily dominating their sport. Sadly, in the summer of 2013, the list continues to grow. And this final name really hurts, not only for the kids in Milwaukee, but for youngsters all over the world. 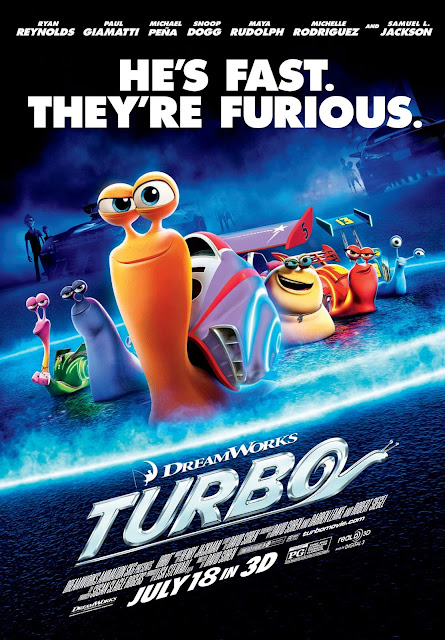 Dreamworks' Turbo has the misfortune of coming to theaters mere weeks after established animated franchises raked it in (Monsters U [review] and Despicable Me 2 [review] are both top 5 in dollars earned this year). While racing snails are probably interesting enough to entice the little ones, Turbo, sadly, is nothing we haven't seen before. And judging by the opening numbers, we probably won't see again.

Box-office numbers and animation saturation aside, the real problem is  familiarity. Turbo is essentially a retelling of Cars with snails and people, instead of...well, cars and more cars. Throw in a smattering of Rookie of the Year and you've seen this movie already. You know what's going to happen and you sure as shit know how it's going to end. But, it's certainly enough fun along the way, especially if you're sitting shotgun to an almost-four year old, and merrily stuffing your face full of cornbread popcorn. Ain't nothing wrong with that.
Anyway, on to the story. Oh, feel free to replace any of the nouns and see if it reminds you any other kids' movies, okay?

A tiny snail named Theo dreams of going fast, and one day, after a freak accident, wakes up to realize his dream has come true. He's an oddball now (a chemically enhanced freak of nature, dubbed Turbo), defying the way he should be, and simultaneously challenging others to let go of their narrow preconceptions. He believes in himself, and finds another outcast to believe in him, too (a taco truck guy of all people). They go on a road trip to ultimately face an unbeatable opponent. Eventually, the odds are completely stacked against them and the adversity is so strong, they ought to just be happy that they came this far and head home. But in a shocking turn of events, those who once didn't believe in them now believe! I'll let you guess figure out how it all wraps up. Because, in the creepiest voice I can muster...I'll never tellllllll....

Obscure Brittany Murphy quote complete, let's cross something else off the imaginary checklist: the Yays and Boos.

Boooooo!
My daughter was due today, but apparently she's not ready. Or, more likely, she's just another member of this family who can't show up on time for anything. My wife (somehow asleep right now) is incredibly uncomfortable, as these final moments are moving at a snail's pace.

A regular snail. Not a chemically-enhanced one.
Unfortunately.
Posted by m.brown at 11:51 PM

Email ThisBlogThis!Share to TwitterShare to FacebookShare to Pinterest
File this under Ryan Braun/Reynolds