There's a dead woman in this house. And you let her in.

In addition to the required elements of nitrogen, phosphorus and potassium, I'm utterly convinced that my family tree was also fertilized with a generous scoop of utter f--king insanity. Swinging from the branches with dead-eyed smiles on their faces, there are a host of unstable folks littered throughout my esteemed lineage. Fine, they're not total f--king psychopaths or anything, but we've definitely got some real...weirdos.

And while that should be rather unnerving, the older I get, the more I realize that just about everybody is going to end up crazy in some way. And since I'm a guy, mine is likely going to be some silently inward thing that is generally acceptable, or at the very least, tolerable.

But the ladies? My goodness. Their crazy is often this all-consuming force that drives the regulars to the brink of madness. Yes, bad things have happened many years ago, but do we have to dwell on them all of the current days? I mean, we're all haunted by demons from our past, sure, but at some point, you've got to move on and let them go.

Especially the literal ones. 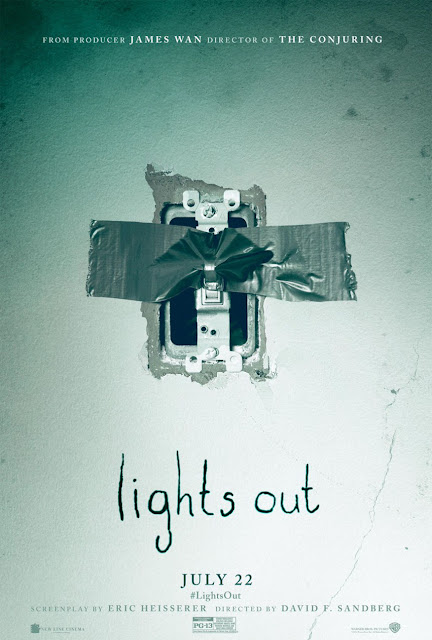 With my last (summer) Bargain Tuesday staring me in the junk, the only movie I was able to finagle my way into (and still manage an on-time pick up of Matty) was director David F. Sandberg's horror flick, Lights Out. I'd like to say that nothing can be too terrifying on a weekday morning, but that was before I overheard that the next screening of Nine Lives was totally sold out. *shudder* Apparently, where I live, people love cheap pussy.

Lights Out opens exactly where you'd expect it to, a poorly-lit, mostly-deserted, textiles factory. Yep, that old place. And as yet another day of making...uh, textiles, ends, it's clear that shit ain't right. At all. Lurking in the shadows is some evil demon-thing, apparently pissed as a motherf--ker. Maybe her scarf came in like, regular black, not Satan's Heart. Whatever the case is, this lady, made entirely of the absence of light totally kills some f--king dude with her shadow hands...and we're off. Sort of.

Turns out this demon chick, (the extra dirty) Diana, is the best friend of definitely single/definitely crazy mom, Sophie (the always reliable Maria Bello). Sophie might have an old cheerleader uniform in the attic that she'll put on and show you her bushy old pom-pom, but as the mother of young kid named Martin, she ain't exactly getting it done. Unless, of course, when Diana isn't terrorizing the f--k out of ol' Marty, she's heating up Bagel Bites and checking his math homework. If only there was another, (possibly sexy) family member that he could also be haunted with go stay with. If only.

Cue the boner trumpet, as Martin's big-sister Rebecca, played by the exceedingly lovely Teresa Palmer, steps in and steps up. Rebecca and her goofball boyfriend have a complicated relationship (they f--k and he has to go home...aww, poor guy), and taking in Martin isn't going to make it any better. But once she realizes that Diana's back (I guess we can assume there was a time that was Diana free), big sis not only takes her brother in, but she also takes Diana on. Oh, you done f--ked up now, Shadow Lady. Tickle-FIIIIIIIIIIIIIIIGHT!!!!! I mean, Flashlight-FIIIIIIIIIIIIIIIIIGHT!!!!
I'm not terribly mad at Lights Out, but outside of 81-minutes of Palmer face-time, it really isn't anything remotely special. Filled with solid small-budgeted effects and reasonably grounded performances, this flick is just scary enough, and easily worth the five bucks I spent on it. I might have left indifferent, but at least I wasn't furious (f--k this movie in it's blue moth-filled ass), which I guess counts for something.

All bullshit aside, there are two huge problems with Lights Out: 1) it's not Don't Breathe, which looks f--king rad, and 2) the utter implausibility of Diana. My mom has had some pretty lame friends, too, but Diana is the f--king worst. Not only is she overly possessive of mom's time, and a giant, floating shadow demon, but this bitch will also f--k up your childhood drawings with her emo-fueled scribbles. What the f--k, bitch? That rectangle house and circle sun didn't come with the paper. That shit took me ten, maybe even twenty seconds.

Also rushed and not worth putting on the fridge, are the Yays and Boos. Since school (kinda) starts on Tuesday, I'm about to put these two in a dark closet for the rest of their lives. It's called my classroom.

Yaaaaaaay!
Boooooooooo!
Welp, Reader 1 and Reader 2, so concludes yet another summer movie season at Two Dollar Cinema. Now that's school is almost back in session (we have a week of mind-numbing horseshit super-helpful meetings and such), it's safe to say I'll be churning out posts (and commenting one yours) at an even slower rate than before.

But don't worry, I'm not really going away or anything. Even if you turn the lights on.

Email ThisBlogThis!Share to TwitterShare to FacebookShare to Pinterest
File this under It's Always Dark (In My Ass)