It all started with recess. Instant relief ensued.
Then it was the ice cream truck, making my adolescent mouth begin to salivate.
Hell, even though I'm not religious, the ones from the church always made me feel...at peace.
And sure, he's annoying as f--k, but the Salvation Army Guy at least lets you know Christmas is right around the corner. There's a certain enjoyment in that annoying f--ker, you know?

Yes, I've heard lots of bells ringing in my lifetime, and many if not all of them have signaled something good was moments away, but never, ever anything like this. Never did they make me double check to see if the door was locked. Never did they make me think about my old high school girlfriend. And never, never did I think about those bells and tell myself, if only I could lovingly place them inside of my...vagina. 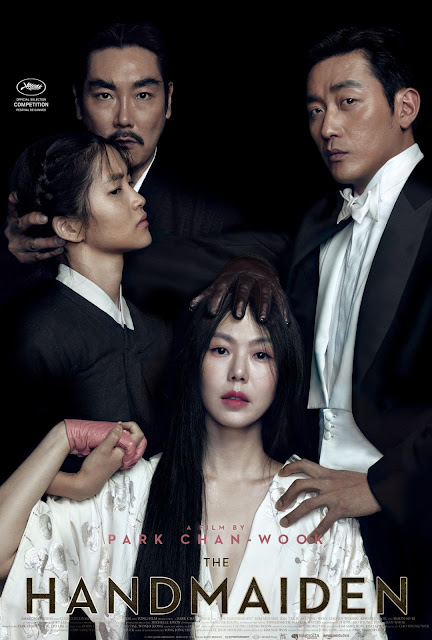 Ring-a-ding-aling, we have a winner! I'm not exactly sure what the contest was, but regardless, Chan-wook Park's The Handmaiden wins in a landslide. Endlessly intriguing, breathtakingly gorgeous and unrelentingly sexy, this sordid tale is unlike any movie I've ever seen. But then again, I usually don't click on the girl-on-girl stuff...anymore.

Set in a 1930's Japanese-occupied Korea, the initial setup is quite simple. A young girl named Sook-hee is hired to be a handmaiden for an eccentric heiress named Lady Hideko. Sure, Hideko is a little, uh, troubled, but that's to be expected when dealing with the (soon to be) insanely rich and (currently) aloof.

Initially, we're let in on the fact that Sook-hee is actually a trained criminal, and that seems like it may be the most scandalous and secretive thing this film has to offer. However, as more and more information is delicately revealed, any little thing you thought you could count on isn't what it seems. At all.

But what is readily apparent, however, is the immediate sexual tension between Sook-hee and Lady Hideko. Yeah, maybe one of them is pretending to be something they aren't (math might not be my strong suit here), but the latent heat firing between various lady-parts is 900% truth. It starts as a bit of a curiosity, sure, as both ladies dip their toes in each other those soapy murky waters, but eventually it's going to reach quite the, uh, climax. If you don't find yourself aroused even a little bit, you might want to make yourself an appointment...in Hell.


(I say this only because if this doesn't get you a little squishy in the pants, I can only assume you watch so much pornography you're practically dead inside...which is fine...I'm not here to judge you. In fact, let's share an incredibly calloused high-five on that, shall we?)

The Handmaiden didn't quite reach the heights of Park's previous utter mindf--k known around these parts as Oldboy, but for my money, no film ever will. Still, this is one of the wildest rides I've been on in recent memory, and a film I recommend you check out. Just don't have any fried calamari beforehand, okay?

Look, there's a lot more to poke and twist regarding this film, but the less you know the better. I went in with only a salacious tweet's worth of information and finished the film with my jar (and my pants) on the floor. Just kidding (about my jaw).

Also smelling quite fishy, are those scissoring sisters the Yays and Boos. We managed to catch this one on a night where our entire family abandoned us. We almost went to the theater to see Rings, but we like our women slithering into dank wells, not out of them.


Boooooooooooo!
When I was in high school, I had a very beautiful Japanese girlfriend named Jennifer. She was, in all honesty, maybe one of the most attractive girls I had ever seen (up until I met my wife...uhhh, right, hun? Right? Hello?). She also was, not long before we started dating, my best friend's girlfriend. But after he graduated (let's call this part 1), they broke up...and, well, things sort of progressed. And if I can be frank, I think it's fair to say that I manipulated more than just the situation, you know? See, just before I went off to college (part 2), I thought it would be a good idea to ----

Oooooh. Sorry. I gotta end it here, as it's getting pretty f--king late.

It's okay, really. This story was going to take a nasty, nasty turn. Consider yourself...

Email ThisBlogThis!Share to TwitterShare to FacebookShare to Pinterest
File this under Sashimi for Everyone!