I'm not that guy anymore.

If you broke into my house and beat the shit out of me, that would be pretty f--king uncool. As long as it was just me, we might have to have some pretty strong words, after that. You know, after I got out of the hospital and learned to talk again.

If you broke into my house and killed my dog, Dodger, well I'm fairly certain I'm going to bury my beloved pup in a tear-filled blur, likely delirious for the next decade of my life. And then I would proceed to murder you and your entire family, possibly even your close friends and acquaintances, too.

But if you walked into my house, was denied my assistance in an important matter, and proceeded to then blow my residence straight to f--king Hell, well, you'd basically be forcing my hand, you know? I mean, you're going to get, like, the biggest hug ever!!!! 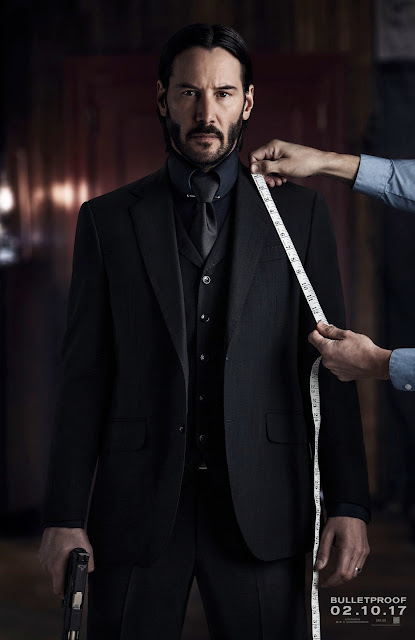 See, I f--king hate where I live, both the house and the location, so do me a favor, Italian Crime Lord Guy, and blow this place the f--k up. In John Wick: Chapter 2, however, the whole house leveling isn't an act of kindness, but instead a declaration of a very low-key war. Kind of. And while this second chapter isn't as good as the one that preceded it [review], it's still a Hell of a ride.

Taking place a few days after the first film, it seems John can't escape his violent past. This time around, his dog is safe (thankfully), but after his home is destroyed, it would appear that Mr. Wick basically has nothing left. Except a debt.

See, when John got out a few years back, he apparently called in a pretty big favor to do so. The guy who granted him his release from the shadowy world of elite hitmen, Santino D'Antino, has come calling on John for payback. And his request/demand...is a pretty tall f--king order. John must not only infiltrate the underground organization he's desperate to leave behind, but he's to assassinate a very high-ranking official. If he succeeds, he'll be wanted by every fellow hitman skulking around the world. And if he fails, well, he'll be dead as f--k. But what if he just says no, and tells D'Antino to f--k off? Yeah...about that...


Look, even if he was just at Home Depot buying wood for the reconstruction of his house for two and half hours, more John Wick on the big screen is a good thing. No, f--k that, a great thing. While the first one had me leaning forward and demanding that droves of henchmen eat a f--king fistful of bullets (uh, and they did), this time, I honestly grew tired of Keanu Reeves shooting guys first in the legs, and then in the face. I know! Someone should kick my ass for typing that, I agree, but after the 97th shootout, I stopped really giving a f--k. I gave like, three-quarters of a f--k. Maybe five-eighths.

The lore of this world is cool as Hell, and exploring more of it was certainly appreciated, but for whatever reason, it all felt low-stakes. John's part of a franchise now, there's no way he's going to f--king die at this point. And with (consistently intense and loud-as-f--k) gunplay as the main way motherf--kers die, there's simply not a lot of suspense. There's only so long a gun-fight can last, you know, especially when everybody's a trained assassin.

Speaking of highly-skilled, uh, asses, here are the Yays and Boos. This was the second film of a rare cinematic double-header (with my lovely wife, no less!), and it was easily the top of the f--king mountain that day. Though, considering John Wick is a hard f--ker, and the other one is about a guy that f--ks harder, that might not be saying much.


Yaaaaaaaaaaaaaaay!
Boooooooooo!
Being (even slightly) mad at a John Wick movie is likely a punishable offense, I understand that. And as maybe one of the biggest Keanu Reeves fans ever, I pretty much deserve whatever hate I get after not loving the shit out of Chapter 2. But instead of saying something shitty in the comments or whatever (and leaving my dog [uh, and family] out of it, why don't you man up and ask me to step outside to discuss this further, you know?

Cause I can be out front in two seconds, asshole. Two seconds.

And then you can burn this f--ker to the ground, okay? OKAY?

Email ThisBlogThis!Share to TwitterShare to FacebookShare to Pinterest
File this under THREE! Is A Magic Number (of bullets [to put into someone])