I wanted to open this post with these five words: Because I give a f--k.

Because, deep down, I actually do. Well, I'd like to think that I do. But, between you and me, there are times when I'm at work, where I think f--k this. And quietly don't complete something that was asked of me, or do just enough to get by. I justify this laziness (or at best, indifference) by telling myself whatever task I didn't bother to tackle, likely didn't matter anyway. It was just busy work pushed down by another person sharing a zest for bureaucratic horseshit similar to my own. They didn't care...so why should I?

While that's all potentially a long-winded way of saying I'm terrible person, which is entirely possible by the way, the corners I cut almost always involve paperwork and the checking of boxes that have zero to do with my actual job. That shit? Couldn't care less.

I only care about the people in front of me and their families. All the higher ups? 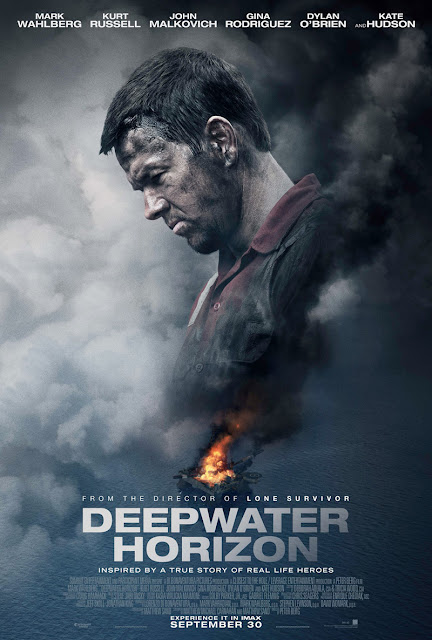 I should probably apologize now for such a toxic level of ignorance, but I didn't know that Peter Berg's Deepwater Horizon was about the 2010 BP oil spill, aka the worst environmental disaster in American history (uh, so far, anyway). I knew the film was inspired by real life events, knew that it starred Dirk Diggler, but was sadly unaware of the greater context the damn-near real-time film takes place in.

More importantly, I also didn't know the extent of the systemic carelessness and selfishness of entirely too many f--king yes men scurrying from rock to rock in the oil industry. Instead of giving a f--k about the hundred plus men and women aboard the massive rig (in addition to say, the rest of the f--king planet), these c--ksuckers routinely ignored any 'costly' measures and forged ahead into an unmitigated disaster. Berg's film isn't really concerned with these real-life super-villains, but instead focuses on the heroic efforts of a few brave individuals.

Connecting the thrilling images of a (momentarily) feel-good Hollywood production to that awful underwater camera feed showing thousands and thousands of barrels of crude oil blasting into the Gulf (that video is seared into my brain) made for a rather hollow movie-watching experience.

I'm altogether grateful for the good that happened on that awful night when the Deepwater Horizon basically f--king exploded, but it's hard to take much joy in it, you know? It's like telling the story of a theater usher that returned somebody's wallet during Our American Cousin. Nice work, bro, honestly...but...sweet f--king Christ, it's I'm gonna need a little more silver in that lining, you know?

Also lacking in the redeeming qualities are the Yays and Boos. This is our first foray into the Mark Wahlberg/Peter Berg trilogy, but certainly not our last. Being birthed by a pair of New Englanders, we're basically contractually obligated to eventually see Patriots Day.


Yaaaaaaaaay!
Booooooooo!
I'd like to think that we all care about our jobs and take pride in what we do, sure, but I'd also like to think we care more about people, instead. Including the ones outside of our own home. That at the end of the day, we actually give a f--k about the person working shoulder-to-shoulder with us, or Hell, the guy working across the street from us. And maybe, just maybe, along the way, we also care a little bit about the environment, too.

But that's might be too much to ask these days, huh? Caring about all those different things at the same time.  Well, let me make it easier on everybody. I'm going to ask you to do one thing, and one thing only:

Email ThisBlogThis!Share to TwitterShare to FacebookShare to Pinterest
File this under Feel it. Feel it. (feel the vibrations)