Show me what you got, muchacho.

It's hard to talk to your kids about how much life sucks.

Try explaining to a little kid that loves his toys, that someday, he's going to have to put them in a box and grow the Hell up. Try telling your little girl about that moment when she'll start the transition to adulthood, and her brain will basically implode to the point where no one will want to be around her. For almost a decade.

Or, better yet, see them through a happy childhood, and then drop on them the idea that their dreams of having a family of their own...might not ever come true. Tell them that maybe the best thing they have to look forward to, is obliviously drifting through the cosmos, slurping chum through a straw as machines live their lives for them.

Go ahead. Gather the most precious thing in the world to you...and break its adorable little heart.

Have PIXAR do it for you. 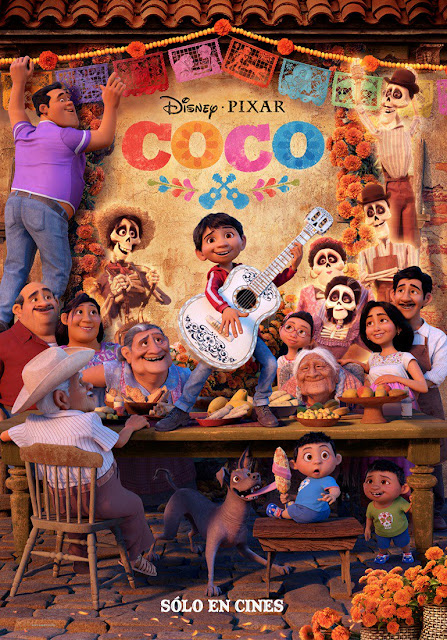 This time around, with their latest film Coco, the fine folks that gave us Buzz and Woody (before ripping them out of our hands), have gladly put the toys away and set the table for a party. A party, you say? Yes. A party. For everyone in your family that's dead. Including that one guy that was violently murdered.

Set during the Mexican holiday, Dia de Muertos, Coco focuses on a fine young dude named Miguel. Born to a family of shoe makers, Miguel's got more soul than sole, as he dreams of playing and making music like his undercover hero, classic movie star Ernesto de la Cruz. But, as the legend goes, it was sweet, sweet music that almost destroyed Miguel's family, and on this day to honor his now deceased ancestors, nobody wants to hear anything resembling a melody. In fact, it would probably kill his grandmother to hear Miguel's angelic voice and/or the strum of his acoustic guitar in the upcoming talent show. Maybe he could enter it...secretly?

No. No chance, amigo. By jamming on a magical guitar he never intended to play, Miguel ends up crossing over to the land of the dead, and well, everyone's gonna find out about his...gift.


Saying a PIXAR film is delightful and touching (and beautifully animated) is about as revelatory as saying I've spent too much on Christmas presents this year, but amazingly, yet again, this is where we find ourselves. I wouldn't say that I enjoyed Coco any more or less than any PIXAR film that has come out in the last decade (outside of all the Cars movies, which deserved to be quietly strangled in a gas-station bathroom), but with their track record, that may be the highest of compliments.

See, Miguel is the nicest kid ever, and the movie is beyond sweet and life-affirming. Even if you don't have your own brood to drag to the cinema (you lucky duck), I'd recommend seeing this one on the big screen regardless. It's wondrously crafted, and makes you feel better about being a part of this planet. Or, you know, the direct opposite of any comments section ever.

Speaking of things that we should all avoid, here are the Yays and Boos. We haven't been watching all that many movies lately, so forgive us if it feels a little rusty around here. And by rusty, really I mean extra terrible. We'll be back to regular terrible soon enough, trust me.


If the internet can be trusted (and clearly it can't), The Incredibles 2 is PIXAR's next film. I have no idea what the story is about, but I can already tell you, it has a lesson that will ultimately crush the spirits of both my children. How do I know this?

When the credits roll, I'm going to have to explain to my little ones, that while every other PIXAR film has expressed absolute certainties from life, The Incredibles 2 has bucked that trend. How, Dad? Well, kids...it turns out...

Not all dads are big, strong guys who save the world again and again.

Some are just normal dudes that do nothing but hate their jobs and write blogs full of nonsense.

Thanks again, PIXAR. Appreciate it!
Posted by m.brown at 11:25 PM

Email ThisBlogThis!Share to TwitterShare to FacebookShare to Pinterest
File this under This Post is Rated G. Ish.