You're the worst criminal of them all.


The sad part? I actually thought it was cute at the time.

See, a couple of months ago, word got out that LeBron James, a demi-god of professional sports, was cheap. Like, extremely cheap. The joke was that his Pandora account still had all the advertisements in it, because he wouldn't spring the extra ten bucks a month for an unlimited subscription.

And while this seems like the appropriate time to mention that James' basketball salary alone for 2017 exceeded 30 million actual dollars (and his endorsements deals border a cool billion overall), that's none of my damn business, quite honestly.

But the real rub? When Pandora found out about this...

...they upgraded him for free. I mean, why not, right? Why should the crazy-rich have to pay for anything? 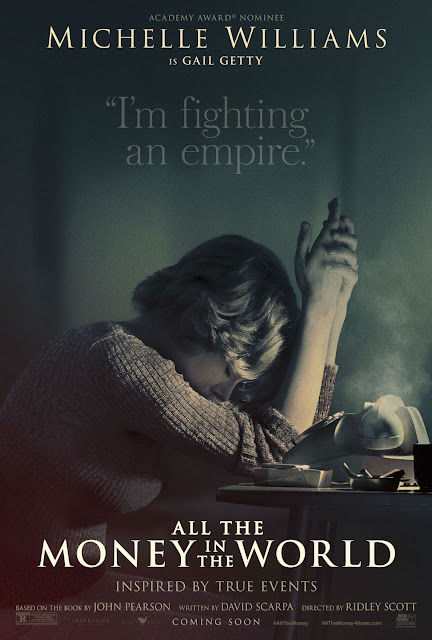 I'll never be crazy-rich, super-rich, or average rich for that matter, so, clearly, I don't get it, but J.P. Getty does. As the protagonist in Ridley Scott's thrilling All the Money in the World, Getty was, at the time, the richest man on the planet. Portrayed by Christopher Plummer (at the buzzer, from way downtown), Getty is the cheapest of cheap-skates, amassing an incredible fortune but hardly willing to spend a f--king dime of it.

In fact, he's not even going to lend you a dime. Nope. Not a single ten cent piece, not even to make, say, an important phone call from a payphone. You know, like the one he had installed in his f--king house.

When his (favorite?) grandson Paul is kidnapped in Italy and held for ransom, the stubborn old cocks--ker refuses to pay up. Flatly. The same way you or I might quickly dismiss the nineteenth request to help save a homeless pet (oh, f--k off Petco), Getty ain't even gonna make that fake move for his wallet. He has fourteen grandchildren and as even an average businessman could figure, obviously, that's fourteen ransoms. Pay now, and he'll be paying forever. And he's got three responses to that scenario: Stop, no and don't. Or was that Eazy-E? I always get them confused.

What isn't confusing, is the kind of relentless awesome that All the Money in the World constantly exudes. Fueled by fantastic performances and an incredibly (mostly?) true story, this flick, for me, was a rare case of lean forward cinema. Maybe you savvy types knew the real story, or aren't overly amused by shiny objects (coughcoughMarkWahlbergcoughcough) like I am, but I'm telling you, this f--ker was a helluva ride. Throw in the whole Plummer/Spacey thing and what's probably a good film borders on something miraculous.

Speaking of miracles, or the direct opposite of, here are the Yays and Boos. This was actually the last film I saw...in 2017, so we might be a little bit hazy on some of the details. I know, I know. Usually I'm so precise....with my lame dick jokes and general nonsense.

Yaaaaaa...
...aaaaaay!
Boooooo...
...oooooo!
Yikes. I need to get to sleep an hour ago. I haven't stayed up this late (on a school night) in a long time. But, what can I say, it feels good to have my 2017 blogging slate finally clean. I can now move on to the (two) flicks I've seen this year.

Lucky me, I can drive to my shitty job tomorrow, exhausted, but happy in the fact that I finally got this post finished. And when I'm falling asleep at the wheel, there's only one thing I can think to do that'll help me from drifting into oncoming traffic...

Email ThisBlogThis!Share to TwitterShare to FacebookShare to Pinterest
File this under Happy 2018