Our donkey's in a ditch.

A few years ago, Blockbuster had this slogan, Life after late fees. This idea came at a time when video stores were still relevant, and basically let you keep the movie as long as you wanted, until they simply charged you some set price and you owned the damn flick. It was a shitty idea, but removed the pressure of having to watch whatever you'd rented that night. Well friends, I miss that sense of urgency. I often find my Blockbuster Online rentals, with their lack of set return date, sitting in my house for f--king ever, especially if it's a movie for us. I'm sure you Netflixers know exactly what I'm talking about. Especially you married jerks. 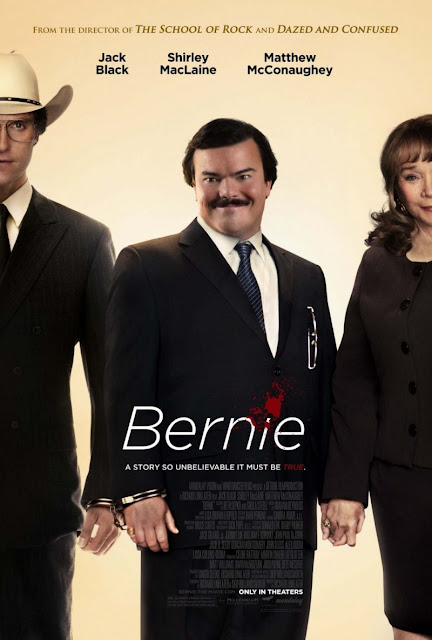 Bernie gathered dust in my house for almost three weeks. And while that sounds like the plot to a bad eighties flick, unfortunately, it isn't. The movie was completely undeserving of this fate too, as it was a pretty enjoyable tale of real-life small-town murder. Wait. Enjoyable. Real. Murder?

Director Richard Linklater, through the use of the actual townsfolk involved, quaint title cards and a quirky score, has created a based on a true story flick that makes the audience feel like murdering someone is, well, not the worst thing you could do. Jack Black, as the titular Bernie Tiede, is just so darn nice, we feel compelled to let the confessed murderer off the hook. Especially since the victim is a rotten, old bitch. And while I was certainly along for the ride, hindsight has dampened my enthusiasm, even if just a little. This guy murdered someone. And then stole all their money. Not cool, bro.

The man who would agree with that last statement the most is the local district attorney, Danny Buck, played with wild-eyed disbelief by the always awesome Matthew McConaughey. While watching the movie I felt this guy was an overzealous madman, but in reality, he's the most sane person in the movie. It actually makes me appreciate the movie much more. The packaging is sweet and fluffy, but at the core, things are pretty ugly. Honestly, this whole town is seriously f--ked.

Might as well check in with the super-effeminate Yays and the ruthless, gun-wielding Boos. Let's see what those crazy bastards think.


Yaaaay!
Booooo!
BOTTOM LINE:  I say go for it. It's not a must see, but I think Bernie is more than what you'll get at first glance. It might sit with you for a day or two. And maybe I read too much into it, but I found it fascinating how much we'll forgive if you're really nice. Maybe I should off someone...

Oh, wait. I'm a huge prick. I get enraged when movies don't get watched.
Posted by m.brown at 9:32 PM

Email ThisBlogThis!Share to TwitterShare to FacebookShare to Pinterest
File this under Seventeen Days at Bernie's