Can a minute save an entire film? Literally, I mean. One. Actual. Minute. As a kid, this was completely possible. One great fight sequence could save a D-grade action movie. A bad thriller or dramatic flick could be salvaged by the arrival (and subsequent pausing) of unexpected, high-quality nudity. An awful horror movie could redeem itself with a legendary death, even if it was just one. But what about a comedy? Can something not terribly funny be redeemed by a moment that made me f--king choke on my tears? 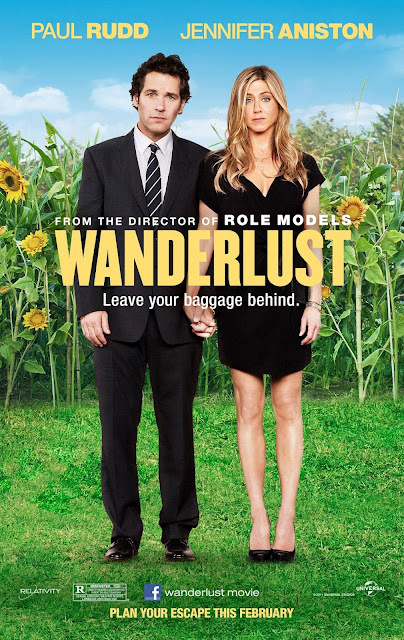 For me, the answer is a resounding yes. When I look back on last week's Redboxing of Wanderlust, I can't help but smile. It helps that I find Paul Rudd utterly hysterical no matter what he's in. Another assist comes from countless members of The State, arguably one of the funniest shows of my formative years. But, a week later, only one thing has truly stayed with me: the mirror scene.

I'm going to apologize ahead of time for hyping it up, because at least half of my enjoyment resulted in the sheer unexpectedness of this classic scene. Sure, some of you (shit, most of you) won't find this nearly as funny as I did, but I literally cried during it. I've watched it on Youtube a few times since, and at this point, it still cracks me up.

Minus this scene, the entire film is slightly charming, but probably a Volkswagen van full of missed opportunity. I like Rudd enough to forgive just about anything, and Aniston is always nice to look at, but they have very little onscreen chemistry. Now, in a way, that's entirely the point, but it also made a lot of the movie feel forced.

If you missed the trailers, and the poster doesn't clue you in, Wanderlust tells the story of two New Yorkers, who lose everything, and relocate to a hippie commune (cue the hilarity). There, they meet Naked Guy, Hot Hippie Chick, Free Love Couple and any other hippie stereotypes you can come up with. All the minor characters have their moments, and Justin Theroux's Seth delivers some pretty funny bits, but this is essentially the Rudd show. Love Rudd, you'll like this movie. Any other feelings about him? Best to just keep it moving.

Like a burnout dancing during an extended Phish jam, let's enjoy this savory breakdown with those earth-loving bastards, the Yays and Boos.


Yaaaaaay!
Boooooo!
I might have rambled a bit, but this took me the better part of two days to complete. And, and, I haven't seen a movie since this one (we're going on a week-long dry spell...movie-wise, that is), so my head's not quite right. Hopefully, as you were reading this, there was a line or two that made your time investment worth it. Because one great moment makes it all worthwhile, right?
Posted by m.brown at 11:08 PM

Email ThisBlogThis!Share to TwitterShare to FacebookShare to Pinterest
File this under And I'm a pacifist, so I can f--k your shit up...