You insult me again, and I'll cut your face off and wear it over my own.

In September of 1995, something shocking happened at our local movie theater in Kailua-Kona, Hawai'i. Paul Verhhoeven's controversial NC-17 flick, Showgirls, was to be shown on one of the town's four screens. The hype was palpable. Also in September of 1995, a young m.brown turned 16 the week before the movie was released. For the time being, I was going to be denied horrible dialogue and unlimited access to Jesse Spano's tits. Worse, I was going to be denied some glorious nudity featuring the Joker-mouthed Gina Gershon. Seventeen years later, I would atone. 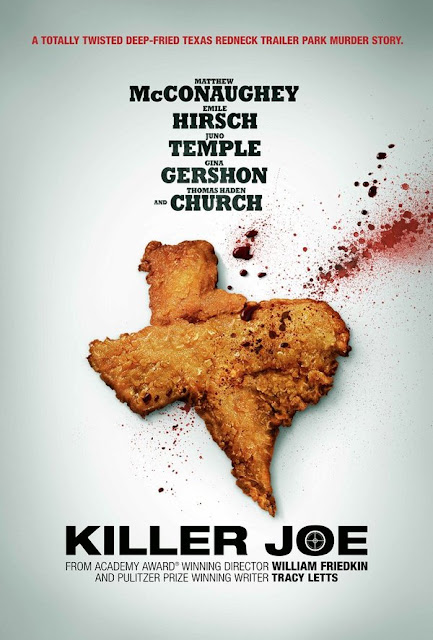 For my 33rd birthday, I wanted to go to the movies. Sure, that's nothing special, but I wanted to see something great. Our local theater had only two things showing, jack and shit, so I did a little research and found a small independent theater in Harrisburg. Sure enough, all three screens were showing something very interesting, but there was really only one choice. I had to see Killer Joe.

When I start to hear about certain movies or performances, I freak out and go the other way immediately. I want to know nothing. Yeah, I knew Matthew MacConaughey was in it. I knew it was a black comedy. That's about it. Emile Hirsch? Had no clue. Gina Gershon? Couldn't recall. NC-17? Wait, they still make those? Interesting.

If you're reading a movie blog, you probably know all the real interesting bits, but I'll try to keep it as spoiler-free as possible anyway. Well, at least up here. Killer Joe, based on a play, tells the story of a highly-dysfunctional family who hire a hitman/local detective to kill their mother. Seems money is a bit scarce (and desperately needed by older brother Chris), and mom has a pretty hefty life insurance policy. Simple enough, right? Well, it seemed that way until Killer Joe showed up. That's when everybody starts going down on Col. Sanders. If only I were joking.

Maybe it hasn't aged well, but years back I fell in love with Sam Raimi's A Simple Plan. This is film where things start out well enough and then spiral completely out of control in heartbreaking fashion. While Killer Joe may lack any real redeemable characters (unlike Plan), things follow a similar path. Any glimmer of hope will be squashed violently. And while you might hope otherwise, deep down you know that there will be no happy ending. That said, there is an almost giddy level of enjoyment in the uncertainty and depravity that Killer Joe basks in.

Before the silly Yays and Boos, let me just mention that the final twenty minutes of this film are unlike anything I've seen in recent memory. Matthew McConaughey (as Killer Joe) becomes as completely f--king unhinged as any character ever put to film. It's so controlled however, that it's damn near breath-taking. As much as I wanted to cover my eyes, I don't think I blinked. Incredible.

That's what I love about the Yays and Boos, man. I get older, they stay the same age. 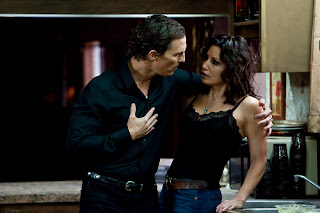 Boooooo!
As much of a good time we had watching this train wreck, the wife and I got in a heated argument on the way home and soiled any excellent post-movie conversation that was to be had (this was my birthday present, mind you), as well as the rest of the evening. So, good people of the Interweb, I leave that delicate responsibility to you. Thoughts? Oh, you haven't seen it yet?

Email ThisBlogThis!Share to TwitterShare to FacebookShare to Pinterest
File this under Kentucky Fried Movie