What if we loaded it with nudity?

One of my favorite movies as a young jerk, was the 1992 flick Wayne's World. As an awkward twelve year old, I found just about every frame of it hysterical. But the one scene that absolutely killed me was the bit where Rob Lowe confronts them about giving the sponsor, Mr. Vanderhoff, some time on the show. Wayne and Garth are vehemently opposed to selling out. It's like people only do things because they get paid. And that's just really sad. This scene was a brilliantly executed jab at selling out, all the while completely selling out. 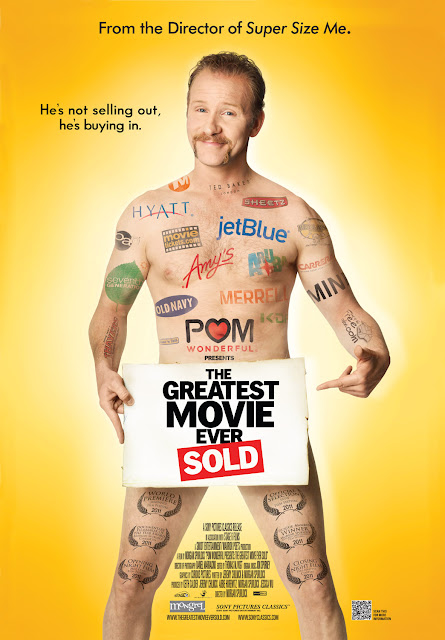 Twenty years later, Morgan Spurlock has basically extended this scene and made a feature-length documentary about product placement and advertising in movies. POM Wonderful Presents: The Greatest Movie Ever Sold is a light-hearted look into the gray area that exists between the art of film and the world of advertising. Spurlock's hook, is that he wants his movie about product placement to be financed through product placement. And while some of you out there might roll your eyes at that idea, I found it incredibly clever.

The film follows Spurlock around as he pitches his ludicrous idea to numerous companies. Major players, like Volkswagon, flat out reject his requests. But secondary brands (Hell, maybe even tertiary brands) like Ban deodorant are thrilled to be apart of something. Eventually, larger companies basically say  f--k it and sign on as well. It's an interesting journey and I can think of few people better to tag along with, than the amiable Spurlock. He realizes this is a gamble, and appears to not be entirely interested in selling his soul to advertisers, but is determined to see the project through. Even if he has to drink enough pomegranate juice to induce a massive, raging hard on.

You know, I've thought about adding ads to the blog - but that's not what we're about here at TDC. Oh look, here come the Yays and Boos, freshly back from Friendly's, where they enjoyed Fishamijigs and Fribbles. Rascals.

Yaaaaaaay!
Booooo!
While this movie may have run a bit long in the second half, I still think it's very entertaining and thought-provoking. I enjoy that Spurlock puts himself right in the thick of whatever it is he's trying to shine some light on, even if, in a way, it's shameless self promotion.

By the way, I found this great new movie blog you should check out. Just click here.
Posted by m.brown at 8:41 PM

Email ThisBlogThis!Share to TwitterShare to FacebookShare to Pinterest
File this under Little. Yellow. Different.