For my world to live...yours must die.

If I had a towel, I'd throw it in. Or, if it was white, I'd affix it to a broom handle, and wave that friggin' thing with everything I've got.

At this point, my hands are up, and I'm going to lay on the floor, slowly, with my head down and unequivocally surrender. I'll even lay my wallet out next to me, but, you know, you already got my money.

But before you finish me off, please, please! 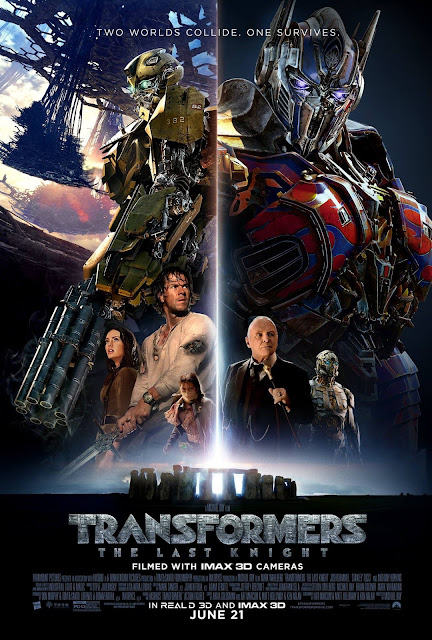 After the relative goodwill leftover from seeing Age of Extinction [review] a few days ago, my son and I headed to Transformers: The Last Knight. We were all caught up with Cade Yeager and the Dinobots, so despite the overwhelmingly negative reviews, we were ready. And dare I say...excited?

Welp, so much for that. Maybe had I waited three years for the dust to settle (like we did with Extinction) things would have gone differently, but I will officially go on the record by saying this is a joyless, lifeless, brainless, steaming robotic turd of a movie. It transformed me from a functional person to a bag of human waste. And worse? It couldn't even destroy me quickly, you know?

It took almost two and half hours to do it.

People still hate the Transformers. Yep. And not because Michael Bay has dedicated just under twelve cinematic hours to their portrayal, but because they keep trying to save Earth. I mean, at this point, clearly we don't deserve oxygen. Anyway, as far as I can figure, no one gives a good God damn about the space robots, outside of a pretty orphaned girl named Izabella and Cade Yeager, Mark Wahlberg's character from the first one. Where Cade was once just a regular dude trying to save his farm, when we meet him, he's basically Dog the Autobot Hunter - minus the super rad/lame shades and Costco-sized jug of pepper spray. But instead of cuffing them and giving them a cigarette, Cade's rescuing the wayward bots and bringing them back to his junkyard. Uh, okay.

I guess that makes sense.

Well, it did. But then we find out that the Transformers have been on Earth since the Knights of the Round Table and once turned into a three-headed dragon. Uh, cool. I guess.

Now, sixteen-hundred years later, their dead-ass planet, Cybertron, is on a collision course with, no surprise here, your anus. Sort of, anyway...if you think about it. Anyway, its goal, to suck Earth off like the most desperate hooker in the known universe. Merlin's staff is the key to all of this, and apparently that old bastard has one descendant alive on the planet...and it's a really hot British chick. And she's the only one who can, uh, handle his staff.

But what is a total joke, are the Yays and Boos. Matty and I are seeing Homecoming fourteen hours from now, and even if it somehow ends up being two hours of grainy footage of a naked old man shooting webs from his crotch, I'm convinced it will be light years more enjoyable than The Last Knight.

But...well...your mother's gonna have to take you to the sixth one.

Email ThisBlogThis!Share to TwitterShare to FacebookShare to Pinterest
File this under The Last Night...I Spend with Autobots