Obviously, I got second pick.

This is my six hundred and fifty second post.

For over half a decade, I have reviewed every single film I've have seen. Sometimes, I can start writing about a movie without the slightest bit of hesitation (it helps when my definition of 'writing' is mostly coherent horseshit, with commas!). But occasionally, I get stuck. Very stuck.

It gets so bad that I don't even open my laptop to do non blog-related things, simply because I'm consumed by this invisible demon breathing down my neck. I thought hobbies were supposed to be fun.

They are, but how can you create something when you've got absolutely nothing to say? 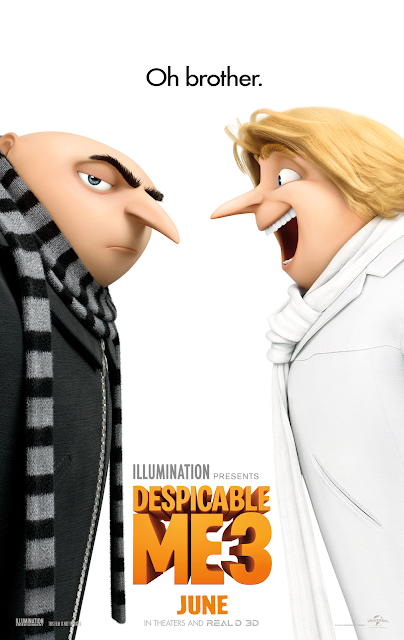 In full-disclosure, I think I wanted to, but yes, I hated Despicable Me 3. Had I not been flanked by in-laws (yeah, you read that right -one on each side), I'm quite positive I would have fallen into a deep, deep slumber.

And if I had, and been rudely awoken to find out that I had not only been loudly snoring, but for the first time in my life, had actually shit my pants publicly, I still think I would have left the theater in a better mood than I did. At least in this imagined scenario, my shit was fresh. Because what was on screen, was anything but.

Four-ish movies in, and we're already at the desperate point where Gru has recently discovered that he has a long-lost twin brother. And if that's not dick-crushingly bad enough, his twin brother's name is Dru, and he's a stupid asshole.

While Gru and Dru are essentially having an epic tickle fight no cares about, Gru's (once?) adorable little daughter Agnes is chasing a mythological unicorn in the forest. Yep. Enjoy that.

In fact, things are so bad even the Minions have bailed! These little ubiquitous yellow bastards have somehow ended up in prison, where if there truly was a Movie God, they'd collectively drop the soap, and wake up the next day feeling like everyone (over the age of 9) who put money on the counter for Despicable Me 3.

So, what you're saying, Blogger Guy, is that there's no way in Hell I should ever, ever, see this abomination, right? Like, even at gunpoint, take the bullet, right?


I would say that, totally, if there weren't one singular redeeming quality known as Trey f'n Parker. I don't know if Parker's villanous Balthazar Bratt was where they busted all their creative nuts, but whatever few minutes this guy appears on screen, well, those are the best minutes.

Speaking of precious time, why don't we save yours and mine (aww, we're sharing) and get right to the Yays and Boos. Being surrounded by adults that know me, my notes turned out extra illegible (fellow nerdy bloggers [with bad memories], you might know what I'm saying) this go round, so we're gonna keep this like a Minion, short and awful.


Look, sometimes I totally run out of ideas and come up with some way random shit to get something on paper, meaning I don't necessarily blame anyone involved with Despicable Me 3. Sometimes my only idea is to comment on their lack of ideas, which I realize it totally cheap.

But I'm over 600 entries in, you know? They're on four (don't forget about the shit-tastic Minions [review]). Four! How are you out of ideas after four films?

The numbers don't add up.

Oh, what's that? These four movies have made over three billion dollars worldwide?

Email ThisBlogThis!Share to TwitterShare to FacebookShare to Pinterest
File this under Despicable Us