Against the Crowd '17: Blogathon 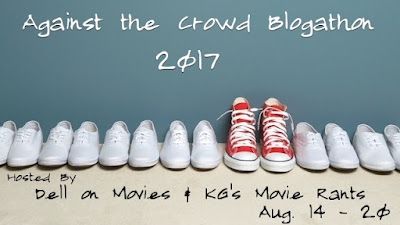 Dell and KG are at it again, so my advice is we check it to wreck it. Let's begin.

In terms of blogathons, these two dudes drop probably the biggest event that I know of (or, uh, am loosely invited to), and it can be summed up in three lovely words: f--k you, everyone! Wait, what?

Here are the rules:

1) Pick a film that everybody thinks is a wonderful achievement in the arts, and let them in on the little secret that it's no better than a massive turd, rolled up in wet newspaper and microwaved on high.

2) Pick a film that everybody thinks is a raging dumpster fire, and let them know that if they ever say anything else bad about said movie again, the only thing burning out of control will be their toothless, withered corpse.

3) Make sure, after reading your entry, no one ever talks to you again. 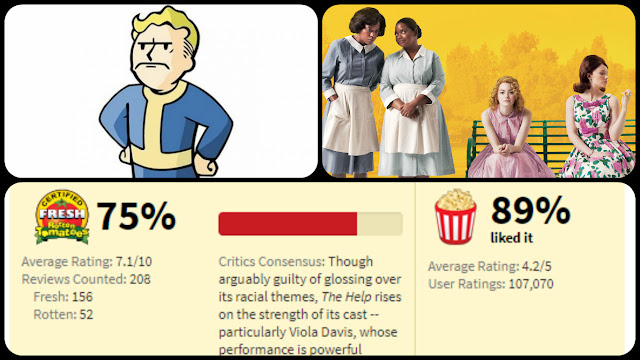 When I initially reviewed The Help in 2013 [post], I only kind of hated the way that it made the shitty history of this country adorable. But the more I think about it, the more I can't believe this is generally considered a good film, and one could only assume, something a film critic (or audience member) would recommend. Yes, the cast is really good, but if the plane is crashing into the side of the mountain, does it matter how fast the flight attendant got you an extra blanket? No, no it does not.

I get it, not every movie can be Do the Right Thing or American History X, but The Help makes Remember the Titans look like f--king Django Unchained. And potentially an even a bigger strike against it? It doesn't even have the decency to gloss over racism in a timely fashion. This sumbitch is almost three hours long. Three hours?!?

Hell. I could probably bake (and eat) a shitty pie in half that time. 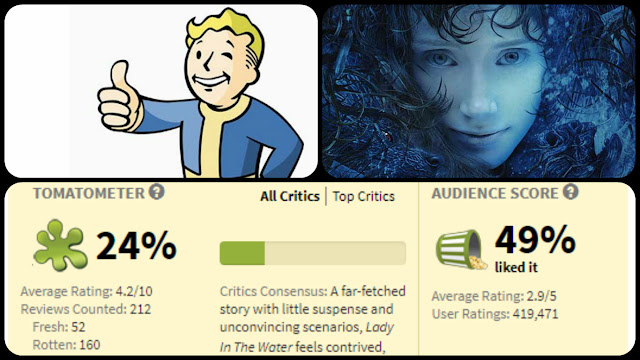 I love a good story. If someone is going to tell me a weird tale full of weird characters, I'm so f--king in and appreciative, it might border on pathetic. Clearly, the allegedly pointless anecdote...is kind of my thing.

I wrote (like, on paper...in a journal) a review for Lady on the Water a decade ago (moments after I saw it theatrically), and I still stand by my love for its unrelenting quirkiness. And, let's be honest with ourselves, any movie with Paul Giamatti is at the very least, undeniably brilliant. I know this is the film that was the beginning of the end for M. Night, but in the context of a fairy tale he told his daughters, I think it's so vastly underrated, it makes me want to throw up...on the people that hate it. Scrunts, narfs, guys who only work out on one side of their bodies? I found it all silly, but endearing and original, you know? I'll take that any day of the week.

Oh, but what really chaps my ass? The fact that every single review not only bashes M. Night for casting himself as a visionary writer in the film (how dare the writer of the film cast himself as a writer...of the film) but also for framing the film critic character as a one-note douche who basically hates everything (and subsequently dies a gruesome death). Sounds like sour grapes to me. And worse, after all his early success as a writer/director, it's pretty obvious that people were rooting for him to fail, which is a quality in people that makes me want to live alone under a bridge.

Or, in an apartment complex full of a bunch of eccentric weirdos.
Posted by m.brown at 1:55 AM

Email ThisBlogThis!Share to TwitterShare to FacebookShare to Pinterest
File this under To Dell With All Of You