It's preventable, that's the worst part.

It's late summer of 2017, and when I turned on the news this weekend, the flickering headline said three dead at white nationalist rally. Being that my kids were already asleep, I was able to watch the footage for a few minutes, and all I could think to myself was how f--ked up this godforsaken country is. How I absolutely dread where we're headed...

...moments after kissing the cheek of my precious four-year old girl. Seriously, where am I supposed to find comfort in this world, when I'm the father of such a little kid? Where's my solace?

Oh, right. This level of awfulness? 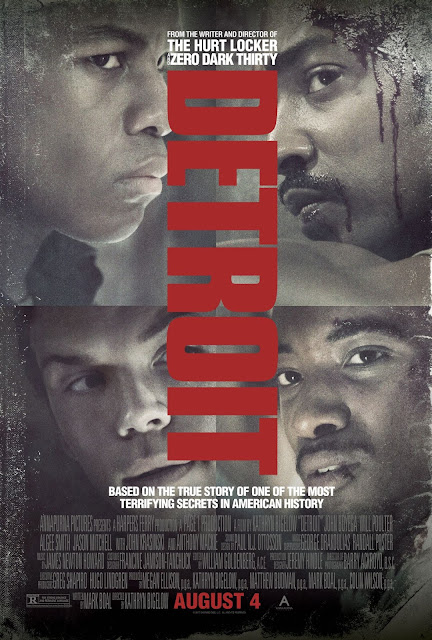 I wasn't super excited to see Detroit this past Tuesday, but I'm increasingly glad I did. It's rare that my wife and I get a night to ourselves, and I knew she wanted to see something light and fun. Yeah, about that. See, shocking no one, Kathryn Bigelow's latest? It's the direct f--king opposite.

It's late summer of 1967, and after the police raid an unlicensed club in downtown Detroit, hauling out many African American veterans in the process, tensions between the police and the people on the street escalate exponentially. Despite being encouraged to chill the f--k out by community leadership, the crowd turns violent and rioting and looting erupts.

The next day, as local police and national guardsmen patrol the city, the film's action picks up with an officer named Krauss pursuing a looter. The dude flees on foot, and instead of letting him go, Krauss shoots him in the back. Multiple times. By the time Krauss gets back to the station, he is informed that murder will be indeed, the case they give him. Inexplicably, however, he's allowed to finish his shift.

Well, at least he'll probably play it cool, right? Being that his ass is most definitely grass, right?


Krauss is going to eventually wind up at the Algiers Motel, where police are responding to the threat of sniper fire. Also at the Algiers are Larry and Fred, two young dudes fresh from an abruptly cancelled concert nearby. Larry is the lead singer of The Dramatics, a sweet quintet with dreams of signing with Motown, while Fred is something akin to their manager/hype-man/utility infielder. These two guys are simply trying to keep their chins up after a blown chance, and their heads down in all the chaos.

Keeping our main dudes company (/also captive at the Algiers) are two white chicks named Brittany and Tiffany Karen and Julie, Greene - an army veteran, and few other dudes just chillin' out tryin' to have a good time. Oh, and there's this security guard named Dismukes kind of milling around, too. But I'm not 100% sure how that guy fits in (the best I can do is right place, wrong time).

Unfortunately (and rather obviously), this night is not going to end well. Not even for the people that make it out alive. Krauss and his partner(s) not only cross the line but f--king obliterate it. It would appear (to them?) that they're looking for justice, but these racist a-holes either aren't smart enough, or don't give a shit, about the best way to go about finding the truth. In the end, three people will be needlessly killed.

Speaking of things that should never ever happen, here are the Yays and Boos. As unsettling as this entire film is, it's also incredibly compelling. And I hate to use the t word, but for f--k's sake, it certainly speaks to the world we live in today. Seems we haven't learned much in the last fifty years, huh?


Yaaaaaaaay!
Booooooo...
...ooooooo!
These last few days, well, they've been very, very hard for me. This f--king nonsense in my own country, as well as how it's been handled from the top, has been sickening. And that's on top of some dire shit in my own family. Something has happened that's unbelievably tragic and it's safe to say, sides have clearly been drawn, you know?

And just as it's presented in Detroit, when you lay it all out there, there is only one side in a situations like these, right?

No. There's two. And there always has been.

Email ThisBlogThis!Share to TwitterShare to FacebookShare to Pinterest
File this under Detroit Cop Shitty