I look for pleasure in the details.

I'm not sure if other dads do this, but I tend to say lots of ridiculous and untrue things to my children.

I invent countless fictional characters, give them horrible accents, and try to make my kids laugh by detailing the horribly unfortunate lives these accident-prone individuals lead. This summer was dominated early by the unholy trio of Trixie Biscuits, Skooch MacGillicuddy, and Pumpkinspice Malone.

But when my son came home from camp one day and told me that there was a pair of German siblings in attendance, everything changed. Otto and Gunther, two young and very serious German boys became my go-to characters.

And it turns out, perhaps surprisingly, lots of crazy shit happens in Germany. 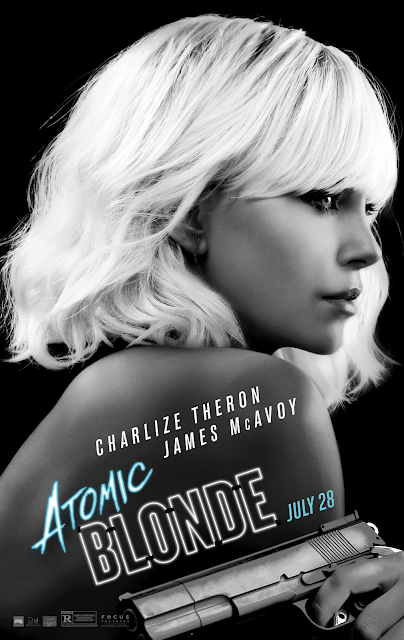 If I had to take a test concerning the finer plot details of Atomic Blonde, I'd probably be rolling the dice on at least half of the questions. That's not to say that I didn't enjoy the movie (um, as someone who appreciates beautiful women, that would be f--king impossible), it just gets to a point where who's working for who and for what reason becomes about as relevant as anything in this post that's not a giant picture of Charlize Theron.

Basically, this flick plays out like most spy films (at least in premise), with a coveted item unfortunately ending up in the wrong hands. Shocking no one, this hugely important thing is likely to be sold off to the highest bidder, a.k.a the guy with the thickest accent and/or deepest voice, so we're going to need an agent in there yesterday to recover that sumbitch. Like, a secret one, right? Like...someone that will just blend in. Not a nine-foot tall goddess made out of equal parts porcelain and adamantium. Because, you know, no one would notice her.

Turns out, buried deep within a wrist watch that I imagine, at some point, was up the ass of Christopher Walken, just so happens to be a list with the true identity of every single undercover agent in the Cold War. And being that no one knows who the f--k is who (including me, the viewer) or who the Hell they work for, heads are certainly going to roll in the process of securing this timepiece. Well, I guess they're not going to roll, exactly, more like cave in or explode. The Berlin Wall came down on a Thursday, but trust me, leading up to that? It's quite the Blue Monday.

Honestly, I know the film had a writer, and there's dialogue delivered by cool actors, and things happen that aren't utterly f--king chaotic (I think this is called plot?), but all I will remember about Atomic Blonde when I'm breathing my last breath will be Charlize Theron going all John Wick on a bunch of European dudes. She'll be whipping her lengthy frame all over a neon room, looking both cool and sexy as f--k, as some kick ass 80s tune blares over top of the incessant gunfire. And when I conjure up this incredibly visceral scene in my mind, even if I didn't ultimately care why it was happening, I'll smile a huge f--king smile. Because, man, the action was so f--king dope....at the time, it nearly killed me.

But what probably will be the death of me, is yet another appearance by the Yays and Boos. While I thought that this flick was going to be my last theatrical catch of Summer '17, turns out I'd manage to see at least one more. Let's not jump the gunslinger yet, okay? First things first.

My daughter, who just turned four, is now going around the house occasionally talking in this terrible German accent. Lately, since she's taking a liking to the electronic station on XM, she's always talking about Gunther and Otto dropping stupid beats. Every time she does this, my wife looks at me like, what have you done to my little girl? What is she even talking about?

I don't know why she's doing any of this. Really.

Email ThisBlogThis!Share to TwitterShare to FacebookShare to Pinterest
File this under Schlecter Vater