Being that it's late August, and having completed ten glorious weeks of basically being nineteen again, regrettably, I have to go back. To work.

Back to the classroom.
The one with kids in it.

And as I sleepily drive to school every morning, I start to (once again [this is an annual event]) fantasize about all the other jobs I'd rather be doing. At my lowest moments, it's essentially anything else, but there's been a steady top 3 for years.


Deep down, I know I'm not ever going to be any of those things, but it doesn't hurt to dream does it? But maybe I need to step a little outside the box, you know? Maybe fantasize about doing something so crazy...it might just work. Something like... 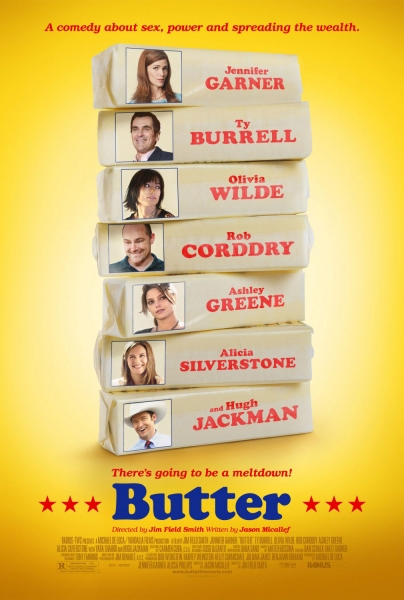 One of my best imaginary friends (we've never actually met, but still) has a thing for a certain actor, and there is, at this point, no way I can disassociate the two. I think of her, I think of the the actor. I think of the actor, I think of her. And when I stumbled onto a little film called Butter (barely) starring said actor, there was simply nothing I could do. I had to watch it.

Especially when I was pretty f--king sure that she hadn't seen it.

I say all this, because I'm thinking an elaborate and /or nonsensical story is the only way one ends up watching director Jim Field Smith's 2011 goofball comedy. Like, it was the only DVD Grandma had...or, after visiting the World's Largest Rocking Chair, we needed to wind down with a movie...

Set in the world of competitive butter carving, this flick tells the the story of Laura Pickler, the domineering wife of a newly retired state champion named Bob. Despite the nice house and affable husband, ol' Laura ain't really got all that much. Except a flaming stick up her ass, frankly, as Bob's glory was what she hung her hat on. Now that he's bowed out, she's Hell-bent on taking the title herself. Unfortunately, Laura will not go unopposed in the run up to the big show. She's going to have to beat a trio of upstart competitors: a kooky cat-lady, an angry stripper, and of course, a talented orphan.

Actually, Butter isn't flat-out terrible, even if it more-or-less shouldn't exist outside of the edgier parts of the Bible Belt. The cast, oddly-recognizable and fairly talented, drag us through the relentless quirkiness of Jason A. Micallef's script kicking and screaming, sure, but when we look up and see their familiar (and sexy) faces, it kind of makes the ensuing dismemberment of our cinematic souls not so bad. Besides, how mad can you be at a movie that features that sexy minx Olivia Wilde playing a hyper-aggressive stripper? Oh, right. Not mad at all.

What you can be mad at, Hell, furious even, are the Yays and Boos. We're about to actually start writing lesson plans and such, so there's a good chance you won't being seeing too much of these a-holes for some time. And this upsets me how, exactly? Ah, good point.

I've got one more day at work before the kids arrive on Monday, and as usual, the dread is suffocating. I mean, there's no way I can change careers over the next three days, right? That's totally unrealistic. Shit, I probably have better odds at being struck by lightening.